Actor Stephen Mangan and his sister, illustrator Anita Mangan, to publish Escape the Rooms in June 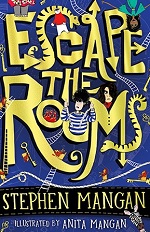 According to the acquisition statement: 'Escape The Rooms is a laugh-out-loud and wildly imaginative middle-grade novel. Stephen’s characteristic humour and invention bursts from every page with Anita’s artwork bringing a host of extraordinary characters to vivid life. Their debut will publish in June 2021.'

Scholastic UK acquired World Rights for the words by Stephen from Paul Stevens at Independent Talent and the illustrations by Anita from Anna Pallai from AMP Literary.

Stephen Mangan has played roles across television, film, stage and radio, including Green Wing, Episodes, Dirk Gently and Jeeves and Wooster. Anita Mangan is a successful illustrator and designer who has worked on award-winning books for the Leon brand, Gizzi Erskine, Fearne Cotton, Ella's Kitchen, Comptoir Libanais and the bestselling Be a Unicorn, Sloth, Flamingo... series.

In Escape the Rooms, 'the last thing Jack expected when he bungee-jumped at the fair was to plummet into the weird and wonderfully labyrinthine Rooms. There he must face a series of puzzles and traps alongside a mysterious girl called Cally, in order to find his way home. Throw in a murderous polar bear, hundreds of tiny yet ferocious lions, some mind-blowing riddles, and get ready for an unmissable debut that young readers will adore to escape into.'

Stephen Mangan said: "From my own experiences as an insatiable young reader, and now watching my three sons discovering the magic of books, I’ve long harboured secret ambitions to write for children. In Escape the Rooms I wanted to try to tackle the complex theme of childhood grief in as entertainingly a way as possible and to try and write the kind of book I would have enjoyed at that age. In the process I’ve discovered that, as I’d hoped, I absolutely love writing for children. I also threw everything I had at this book because I know what a fantastically talented artist my sister is and I didn’t want to let the family down. Now I just have to explain to my two elder boys why their names don’t feature in the story but their younger brother’s does."

Anita Mangan said: "Creating the drawings for Stephen’s words has been such a highlight for me. We have the same sense of humour and his words really come to life, making visualising them easy. All those early years of him devouring books and me just staring at people, places and things is now paying off!"

Lauren Fortune, fiction publisher at Scholastic UK, said: "This book is The Crystal Maze meets Alice In Wonderland: a high energy, hilarious, helter-skelter adventure that is pure entertainment on the page. It is full of larger-than-life characters, sparkling dialogue and just-the-right-amount-of-anarchy. Stephen and Anita have been wonderful to work with: Stephen is creative, imaginative and with a pinpoint understanding of exactly what kids will find funny and Anita’s lively, personality-packed art is the perfect partner. This is a major launch for us and the arrival of exciting new children’s books talents."