Natalie Hibberd reports on the challenges of writing with cerebral palsy 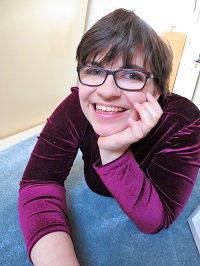 It's funny, but if you'd asked me a few years ago (when I was 14 and had just finished the first draft of Inside Out) whether the book had anything to do with my disability, I would have given you an emphatic "No". My writing has always been a part of me, much like my disability, but for a long time I kept the two things stubbornly separate. As I have gotten older, and the publication date of the book finally draws near, the picture is becoming more complicated.

Before I go on, I ought to explain my disability. Cerebral palsy (CP) is an umbrella term, given to a collection of permanent conditions often caused by premature birth. Because it can affect those who have it in different ways, I want to make it clear that the account I give of its affect on my life and writing career is entirely personal. I cannot speak for all disabled writers, nor would I want to if I could. Nonetheless, my condition has had an impact on the road to publication of this book, and that impact runs deeper than many of those reading this would perhaps assume. Anyway, back to the interesting stuff.

The most obvious way in which CP has affected me is that I am a lifelong wheelchair user. So the age-old solution to writer's block - "Take a walk in the fresh air" - is impossible to execute. The faffing around and paraphernalia involved in getting out of the house each day (getting out of bed, washed, and dressed) cannot be accomplished quickly or without help.

Once all of that's out the way, the impossibility of any actual walking (the thing other people think about the most when they see me) is just the tip of an iceberg. A similar time-based restriction applies to days when, at the height of a project, I must factor in the circus before getting any time actually to do my work. That's the interesting thing about CP. Though most people regard it as a "visible" disability, a large part of what is involved is never seen by others.

Another consequence of CP is that my fine-motor skills are impaired. As a disciple of pen and ink, I spent many long hours practising my handwriting until it became legible far beyond the age at which most people would have mastered it. It is a laborious process to this day. Often my wrist swells up a little bit, and a couple of pages can take over an hour. Of course, there's no law that says I have to handwrite my drafts, but it doesn't seem fair to me that CP should prevent me from doing something on which many writers rely to help their creative processes.

Something else that may surprise you about how CP affected my writing was the sheer number of people, most of them virtual strangers, who took it upon themselves to weigh in on the ambition I've had since I was two years old. Every time I had to endure the mandatory "annual review" given to me as a special needs pupil, I had to hold my ground against them all as they told me all the reasons that my ambitions would never come to fruition. Aspiring writers who are able-bodied do have to deal with this too, but rarely on such a widespread and frequent scale. Boundaries are harder to maintain when you're disabled. 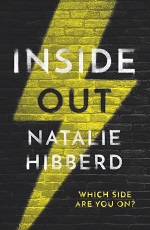 Quite apart from all the practical considerations of being a writer with a disability, I have started to realise just how much CP has shaped the themes of Inside Out. The book is set in a world divided into two factions. The Inside and The Outside. "Us" and "Them". It's speculative fiction, not autobiographical; but you can see how it may have been influenced by the number of times I've found myself unabashedly labelled "them", by both children and adults.

Once, on a primary school display, the school rule "to help those... less fortunate than us" was displayed in the corridor - with a painting of me to illustrate. The picture was chosen without my consent; and (age nine) I had to explain to the headteacher, in floods of tears, what I found so objectionable about it. I am still angry about it. I turned that anger into art.

I'm not ashamed of being disabled. It's a part of me that I can't change and, on balance, don't want to alter anyway. It doesn't define me, but it exists. It is at times difficult, tiresome and painful. I wouldn't be the same without it, and neither would Inside Out. Happy reading, one and all.

Natalie Hibberd was born in Portsmouth and has wanted to be an author since she was two years old. She is publishing her debut novel Inside Out independently with Matador, aged 21. When she isn't writing and reading, she enjoys singing, amateur dramatics, and listening to podcasts. Natalie lives in Petersfield, Hampshire, with her parents and her assistance dog, Chloe. Follow Natalie on Twitter @NatalieHibberd.