Philip Pullman: a tribute to the enchanter

Amanda Craig paid tribute to Philip Pullman as the author received the JM Barrie Award, given by Action for Children's Arts for 'a lifetime's achievement in delighting children' 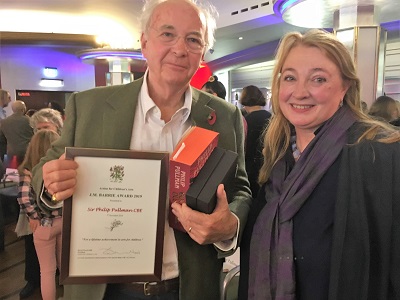 In The Child That Books Built, the writer Francis Spufford, rather controversially, described fiction as "a mood altering drug".

This is ironic, given that parents spend half their lives terrified that their children will become addicted to drugs - and the other half worrying that they are not reading enough. Yet anyone who has ever fallen in love with a particular novel recognises what Spufford describes. You start reading, and you are never quite the same person again.

Many years ago, in 1996, I picked up just such a novel in a bookshop. It was, of course, Northern Lights, the first part of His Dark Materials. It went on to win the Carnegie Prize - but at that time, its author was a well-kept secret.

I become obsessed by my discovery. I bought every book that Philip Pullman had published, and to my astonishment, found that each one was astoundingly brilliant.

"He understands that children, like adults, are interested in ideas about life, death, God, love, science and the universe"

For young children, there was I Was A Rat, the tale of how one of Cinderella's coach-boys, transformed from a rat, coped with being human - which was also a stinging satire on royal weddings. For slightly older ones, there was The Firework-Maker's Daughter, whose heroine is determined to win the prize for best firework display even if it means talking to the deadly Fire-Demon. Not only was it a thrilling quest, described so vividly that one could see fireflies and smell elephant dung, it was also about how to succeed as an artist. Even more moving was Clockwork, his Gothic novel about an unloved little boy whose clockwork heart might run down at any moment, a story exquisitely poised between fairy-tale, thriller and horror.

And then there was his Sally Lockhart quartet, whose heroine, navigating the slums of Victorian London, is all that Dickens's never were. Impossible not to be captivated by its vigour, humour, characters and compelling mystery.

Golden Age 3
Why had I not heard of Philip Pullman? One answer was that 1996 was at the dawn of what I have called the Third Golden Age of children's literature. Adults thought they could leave behind novels for children, as if these were childish and irrelevant to literary excellence. A certain Harry Potter and the Philosopher's Stone had also just been published; something that was to make its author one of the most commercially successful in the history of publishing. I found JK Rowling's world delightful, but Pullman's was in an altogether different category. It was as if Milton and Blake had rewritten the Narnia books. I knew it would change the imagination of generations.

I began to review his books, and to interview Philip and generally talk about his work with fanatical enthusiasm to absolutely anyone who would listen. Not a few of the serious literary people I must deal with as an adult novelist told me they thought that I had gone mad in paying attention to children's books. I took no notice.

As a critic, I compared the second novel in His Dark Materials, The Subtle Knife, to Tolkien's Lord of the Rings. I knew this would probably annoy Philip, but the Lord of the Rings films had just been an international hit - and I thought it might help him. Coincidentally or not, Northern Lights was then bought and filmed as The Golden Compass by the same studio that filmed Lord of the Rings.

Philip Pullman is now the author of over 35 books for children and adults. He has sold over 20 million copies, and he is translated into 40 languages. His Dark Materials is now finding millions of new fans with the BBC series. The serious literary people no longer say I am mad. On the contrary, they awarded him the Whitbread (now Costa) Book of the Year prize (the first time a children's author had ever won this), a knighthood, and many more awards. Given that the science fiction novelist Ursula Le Guin was given the Pulitzer, I see no reason why Philip should not win the Booker Prize too.

So what is it that makes Philip Pullman so extraordinary as a writer?

Fantastic realist
One thing is that he understands that children, like adults, are interested in ideas about life, death, God, love, science and the universe. His children are not sweet, innocent little creatures but full of passion, curiosity, complexity and impatience. He is, like all great fantasy writers, a realist who celebrates being alive in this world.

His Dark Materials is unmistakably a masterpiece. It is hugely ambitious, both funny and frightening, its worlds endangered by environmental catastrophe and corrupt authorities, and where the slip of a knife can take you into a new universe. Some of Pullman's ideas (such as spy flies) were so in advance of their time that they are actually being invented for use by the British military right now. Fairy-tale tropes such as witches, ghosts and talking animals are made to seem as plausible as Oxford colleges - perhaps, we may think, rather more so. Most remarkably of all, in Lyra's universe the soul is visible and tangible as an animal companion.

It may seem ironic that an author whose fiction is so much about real children's need to not be children forever is being given a prize in memory of JM Barrie, who celebrated the complete opposite in Peter Pan, the boy who never grows up. However, I think Barrie himself would understand. What he pleaded for was imaginative freedom and joyfulness at a time when Edwardian children were having it crushed out of them by the authorities of their day. Our own children face these enemies again, whether they are called fronted adverbials or the current political cuts to arts and humanities.

For everyone
Pullman's fiction is not, of course, only for children any more than Gulliver's Travels or The Tempest or Lord of the Flies or indeed fairy-tales themselves are. We believe in his worlds because he has thought of the ways in which it is both like and unlike our own. Above all, we believe it because of his heroine. Lyra's ferocity, her energy and her barefaced lies are drawn up from the deepest well of truth. Although you could trace a line of rebel girls in children's books from Alice in Wonderland to Joan Aiken's Dido Twite, she has just as much in common with Jane Austen's Elizabeth Bennet and Elena Ferrante's Lila.

Lyra, in the way of all great protagonists, is us. 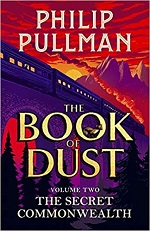 One other aspect of Philip Pullman that must be mentioned is his insistence on craft. He is a craftsman himself as well as a writer, and it shows in the beauty, precision and balance of his sentences, which are a pleasure to read aloud. Whether in describing how fireworks are composed, or why the Welsh miners in The Secret Commonwealth can tell Lyra what her aleithiometer is made of, he celebrates craft - because craft is also essential to fiction. Yet the past century has seen craft dismissed, usually with the adjective "mere" before it, and never more so than in the creation of a story.

"Yes, alas, yes, the novel tells a story," EM Forster complained, and this notion that a proper novel should dispense with story was enthusiastically taken up by those who wish to sever the art of fiction from its craft - much as Mrs Coulter and the Magisterium severed children from their daemons in Northern Lights.

But without story, the novel dies. People do not want to read a book that is only about its author's command of language or clever ideas. They read it because they want to find out what happens next. And while you can certainly teach the craft of writing, you absolutely cannot teach someone how to be a storyteller. Pullman's greatness lies in doing both. He is both an artist and a craftsman; the servant of story, and its master.

"Stories aren't made of language: they're made of something else," as he put it in Daemon Voices; adding "perhaps it's life". A story whose enchantment removes us from pain, puts courage in our hearts, ideas in our heads, laughter in our bellies and shivers in our spines - that is so much more than a drug. It's what Sir Philip Pullman has given us. It is enchantment.

Amanda Craig's most recent novel is The Lie of the Land (Abacus).