Before the cancellation of London Book & Screen Week, we talked to ambassador for the programme Lynda La Plante 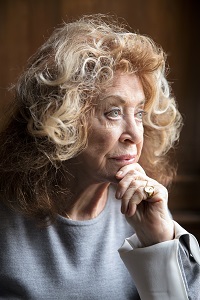 From early performances with the Royal Shakespeare Company, in The Sweeney and Bergerac, to writing scripts for BAFTA-winning shows including Prime Suspect and Widows, La Plante has also achieved international success as the author of more than 30 novels. Her new novel, Buried, the first in a new series, is due from Zaffre in April.

What attracted you to becoming a London Book and Screen Week ambassador?
I have been in the publishing and television industry for over 40 years. I would like to share some of my experiences and insights with other writers. I hope my story is one that inspires and encourages.

Your work has often focused on the struggles of women in a male-dominated world. What was it that pulled you towards this theme?
I have never intentionally set out to write about women’s struggles in a male-dominated world. I have always researched when considering starting a project. For my very first TV series, Widows, part of that research was meeting the wife of a hardened criminal, someone whom I’d only ever seen caricatured before. I therefore used this character for Dolly Rawlins. For Prime Suspect, I met an indominable high-ranking police officer who became DCI Jane Tennison. In many ways, meeting these women gave me the incentive to write the truth.

Your writing is known for its gritty realism. Do you enjoy research?
Research has dominated my writing from day one. One of the most important elements of working this way is that it is not only informative, but makes me constantly aware of showing respect. I have been fortunate to be given access not only to police procedure, but to forensic pathology, and my priority is therefore not to take dramatic licence, as the reality is often far more dramatic. By building relationships over many years, I ensure I am kept up to date with all the new scientific breakthroughs. During my time working on The Governor, I was allowed access to some of the most hardened prisoners in English prisons. Working in exactly the same way, I gained not only their respect, but an insight into the criminal mind.

Why do you think so many people enjoy reading and watching dark stories?
I don’t think there is great enthusiasm for dark stories, as that is almost a different genre. My belief is that while people enjoy reading about crime, in the end it’s about finding pieces of a jigsaw puzzle to solve a mystery. You can keep a reader held in tension, anticipating the final outcome, but when the final piece falls into place - ie, the perpetrator is caught - the crime and the darkness and the pain are finished.

You’ve been collaborating with Bonnier and Cass Sutherland on a podcast about forensic science - what drew you towards this idea?
What drew me to the idea of working on the podcast, "Listening to the Dead", with the wonderful Cass Sutherland, and encouraged by Bonnier, is how often I get letters and emails asking about where and how I gather my information on not just forensics, but the extraordinary diversity of methods scientists now use to solve crimes. The podcast consists of me interviewing a variety of specialists in the hope that it will not only fascinate readers who are already aware of my novels, but will intrigue a whole new readership. I’m sure many writers out there will also find it beneficial. My podcast interviews scientists specialising in a wide variety of fields, including forensic botany and ecology, fire investigation forensics, DNA and blood forensics, forensic entomology, tech forensics and pathology.

Do you have advice for aspiring crime writers?
Do your homework. This is a very competitive genre and you need to be aware of not only current novels, but current television series and films too. There is nothing worse than working on a story for months only to find out it has already been done. I would also advise that you learn how to write a treatment of no more than two or three pages, because as a writer, you need commissions, be it in publishing, television or film. You will also have to learn how to pitch a plot line if your treatment gets a bite. Importantly, if you do have the good fortune to get a project commissioned, pay for a good lawyer to read through and explain all the contracts you will be asked to sign.