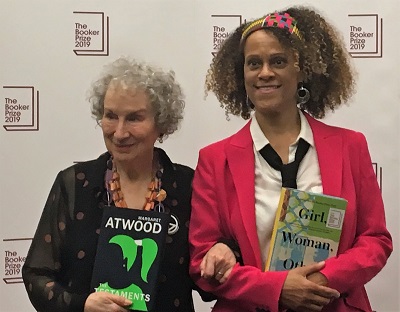 In a shock move, last night Margaret Atwood and Bernardine Evaristo were announced as the joint winners of the Booker Prize 2019 at a ceremony at Guildhall in London. The pair will share the £50,000 prize money after the judges 'broke the rules' to award the prize to both authors.

The Booker has been awarded to two authors twice before, in 1974 and 1992, but in 1993 the rules were amended to allow only one winner. Literary director Gaby Wood said that the decision was 'definitively against the rules' but that the panel had chosen to 'flout them'. Peter Florence, chair of the judges, said they were 'Two novels we cannot compromise on', and added that, 'They are both phenomenal books that will delight readers and will resonate for ages to come.' Wood added that the judges left the judging room 'happy and proud'.

The shortlisted authors have appeared in the media over the last few weeks, including a reading with all six authors chaired by Natalie Haynes that took place at the Southbank Centre on Sunday night. They also appeared at a reading and talk at the Cheltenham Festival on Saturday night in an event chaired by Gaby Wood, literary director of the Booker. Front Row on BBC Radio 4 brought together each author and a group of readers for a Q&A, broadcast in the weeks before the announcement of the winner, and the Guardian created podcast episodes with the shortlisted authors. 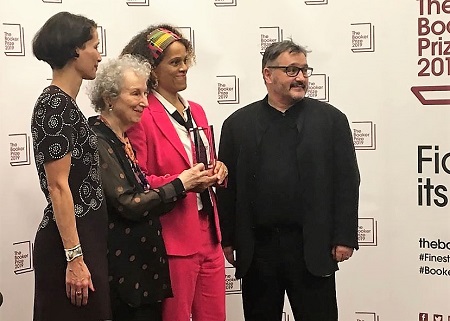 This year the judging panel was headed by Peter Florence, founder and director of the Hay Festival, alongside former publisher and editor Liz Calder; writer, broadcaster and former barrister Afua Hirsch; novelist, essayist and filmmaker Xiaolu Guo; and concert pianist, conductor and composer Joanna McGregor. The shortlist was cut down to six from a shortlist of 13 books, also including titles by Deborah Levy, Max Porter and John Lanchester, which was in turn selected from 151 books submitted by publishers. Books published in the UK or Ireland between 1 October 2018 and 30 September 2019 were eligible, and the shortlist was announced on 3 September.

When announcing the winner, Florence said that there camea time in the Booker process when you were 'reducing the books that you celebrate, and not only do I want all the shortlist to win the prize, but I want the longlist back as well. And I would like to pay tribute to that longlist." He went on to pay tribute also to the editors, agents, writers, booksellers, librarians and journalists involved in the prize, along with the Booker trustees, his fellow judges, and Gaby Wood. He said: "We love this shortlist... Today, we tried voting. We found that there were two novels - not that we couldn't let go of, but that we desperately wanted to win this year's prize. So we're awarding the prize jointly to both of them. There are two winners of this year's Booker Prize who will share this honour and this money."

On winning, Atwood said: "Neither of us expected to win this. I'm very happy... I'm very surprised. I would have thought that I would have been too elderly. I kind of don't need the attention, so I'm very glad that you're [Evaristo] getting some. That makes me happy. It would have been very embarrassing."

Evaristo said: "It's such an honour to share this with Margaret Atwood, who is such a legend, and so generous - thank you so much. This is incredible. I never thought it would happen to me. I'm the first black woman to win this prize. I hope that honour doesn't last too long." She thanked her editor, Simon Prosser, along with the team at Random House, her agent Emma Paterson and her former agent Karolina Sutton, Sharmaine Lovegrove of Dialogue Books, her friends and family, and her husband. She also thanked the judges, saying "One man and four women made the difference, I think. They made history."

Following her win, Joanna Prior, managing director of Penguin General, said that its reprint figure for Evaristo's novel would be 40,000 to 50,000 copies. Atwood's team had not yet confirmed numbers.

Following the dinner, there was a press conference with Evaristo, Atwood, Wood, and Florence.

When asked if she would rather have won the entire £50,000, Evaristo said: "What do you think? Yes, but I'm happy to share it. That's the kind of person I am - I'm a sharing person." She added that she would have spent the further £25,000 on paying off her mortgage.

When asked how the judges were able to split the prize, and what this meant for the future of the Booker, Florence said: "We found that the situation we were in as a jury demanded that we chose both these books. And we explained this to the Booker people, and they said no, and sent us back. So we spent another hour discussing the books, and we came to the same conclusion. And they told us no, we couldn't, and we then took another half an hour, and still came, after a lot of very serious conversation, to the conclusion that given the submission that we had this year, which was enormously strong, and given our principle of consensus on how the jury was going to operate, that we still believed that this was our decision. And we went back to the chair of the Booker, and said, we don't think that the rules fit the particular circumstance that we are in, and this is our decision. They very graciously agreed to accept our decision as a jury."

Wood added: "They have broken the rules, rather than changed the rules. There is no change to the rules in future."

On the question of whether she was disappointed to share the prize, and if not why not, Atwood said: "I'm extremely pleased to share the prize. As I said, it would have been quite embarrassing for a person of my age and stage to have won the whole thing, and thereby [prevent another author] from going through that door. I would have been embarrassed - trust me on that." She added that she understood the jury's decision, saying: "I've been on many a jury, so I understand the predicament... in a perfect world they should have split it 15 ways, or however many were on the longlist, but unfortunately that's not how it goes. The problem with prizes - and I think they're wonderful in some ways, and not so wonderful in others - I sometimes tell my editor that what you need to do is go to the stationery shop and get some of those big gold seals and an embossing device, and emboss the gold seals with Latin around the outside and an animal on the inside, and then stick them on all your books and people will think you've won something. It's very difficult for people who are very good writers and who don't happen to have won a prize, in this world of prizes. There are a lot of prizes, and sooner or later, every good writer ought to have one - that is the situation."

Evaristo said: "I'm just so flattered to have won the prize - and yes, I'm sharing it with an amazing writer, but I'm not thinking about the fact that I'm sharing it - I'm thinking about the fact that I've got it. I think that's an incredible thing, considering what the prize has meant to me in my literary life. It just felt so unattainable, for decades, so I'm absolutely flattered to have the prize and to share the prize."

When asked how it felt to be the first black woman to win the prize, Evaristo said: "It's a bittersweet experience. It's great to be the first, but I shouldn't be the first. I think this prize has moved with the times, and our culture has changed somewhat in the last few years, and so the fact that a book by a black British woman writing about black British women, the fact that I have won the prize with this, is an incredible thing to happen. I don't think it would have happened probably five years ago, or 10 years ago. I think it's about how the prize is run, and who the people are who are chosen to be judges, and the basic ethos around the prize that will affect who gets to be shortlisted and to win it in the future. The prize has been a diverse prize, it just has not gone to black people hardly at all, so that has been a problem. I'm 60, and I've been in the arts 40 years - hopefully it will inspire people who are ploughing away at their writing for decades. Hopefully I will be a role model, especially to writers of colour."

Atwood went on to explain that she intended to spend her half of the prize money on being 'annoyingly virtuous', on a scholarship for indigenous students in environmental fields in honour of Chief Harry St Denis of the Wolf Lake First Nation, who died in 2018.

Asked whether the splitting of the prize represented our current political situation, or whether it was by chance, Florence said: "One of the things that I've learned over the last 10 months is that context is everything... Maybe in a time where there a lot of lies told in public, the importance of writers as truth tellers is also vitally important. Maybe there is a tiny tinge of admiration for the Extinction Rebellion. If you find a rule, as opposed to a law, that is wrong, maybe challenge it... it's driven by a desire not to compromise, a desire to say, 'Find a way to try to make this celebration possible.'"

When asked if she could discuss the juxtaposition of the recent death of her partner and winning the Booker, Atwood said: "Do you think that's in really good taste? It is the best of times and it is the worst of times. If you're really wondering what I'm doing here tonight, it's better for me to be out, surrounded by lots of people and talking about other things."

Wood: "When I saw you both up on the stage I thought that both of your books have come true: women supporting each other, two books that you wouldn't necessarily have put together on your shelf but that together have made a third story."

Margaret Atwood had been the favourite to win, with 6/4 odds at William Hill, followed by Elif Shafak and Lucy Ellmann, both at 3/1, Bernadine Evaristo at 5/1, Chigozie Obioma at 6/1, and Salman Rushdie at 12/1.

The Booker was opened up to writers beyond the UK and Commonwealth at the end of 2013 by previous sponsor the Man Group, providing that those authors were writing novels in English that were published in the UK. The prize is now sponsored by Crankstart, the charitable foundation of Sir Michael Moritz KBE and his wife, Harriet Heyman, in an arrangement that formally began on 1 June. The £50,000 prize is the most important literary award for a single work written in the English language.

During the evening Kuljit Bhamra took to the stage first, before Katie Derham introduced the ceremony. Franc Ashman, Paapa Essiedu, and Elizabeth McGovern performed readings from the six shortlisted novels, and 2018 Anna Burns (Milkman, Faber) gave a speech in which she revealed the ways that winning the prize had changed her life, from being more financially secure to reconnecting with her family. She described her victory as an 'extraordinary delight' that had improved her 'long term emotional state'. Baroness Helena Kennedy, a trustee of the prize, spoke about the importance of books and storytelling in our current political climate.