Netflix sees itself as publishing's partner 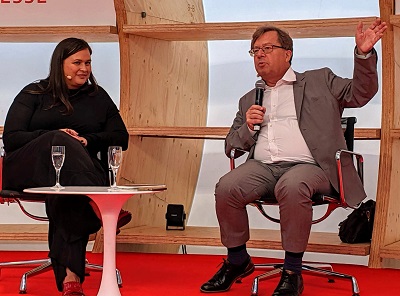 Is Netflix a friend or foe to the book business? That question was addressed by the Global 50 CEO Talk 2019, which featured a conversation with Kelly Luegenbiehl, VP International Originals of Netflix, hosted by publishing consultant Ruediger Wischenbart and with the editors of global trade journals.

"If the Frankfurt community is a family, then we are welcoming a new family member," said Wischenbart, who opened the conversation by asking Luegenbiehl to define Netflix. "It is a streaming services endeavouring to bring great stories to people around the world and remove all barriers," she replied.

Netflix, Wischenbart pointed out, spent in excess of $10 billion on content development every year - the global revenue of Penguin Random House is about $3.5bn. Luegenbiehl said: "We look at the publishers and editors as partners, that is the best word. For us, the more collaboration the better… Our goal is to bring books to life on the screen in a way it has not been done before."

She noted that the company was driven by audience demands. Decisions about content were based on classic storytelling, and not on data or analytics. For her part, she said she was passionate in her search for more stories featuring strong roles for women and by women creators.

Asked what has surprised her in her role, Luegenbiehl replied: "What is exciting is just how quickly audiences have found content to enjoy from outside their own countries and languages. The great opportunity of what I do at Netflix is to bring local stories to a global audience."

As for what is next for Netflix, Luegenbiehl said: "We're looking to develop our first series from sub-Saharan Africa and would love that to come from a book."