It sounded like a novel - so I wrote it 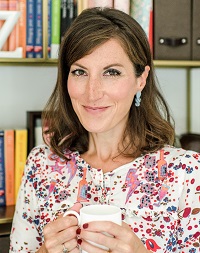 It's a common question that my then-boyfriend and I were often asked on a big backpacking trip we took in 2008. We were travelling around the world for an entire year on redundancy - one last self-indulgent hurrah before Settling Down, and every time Mark blushed and I told the story, at the end people would say, "Wow!" That it sounded like a book, or a film, or something. That it was a cool story.

It was a cool story. The edited highlights are: I loved a handsome stranger - "Train Man" - from afar on our excruciatingly silent commute for almost a year before I got the courage to write him a note asking him out for a drink. When I finally handed over the note and marched up the train as it pulled into King's Cross in May 2004 (trying not to fall over as my legs were so shaky), I didn't know that later that day Train Man would email to reject me (very politely of course - he had a girlfriend); that one month later his relationship would end; that seven months after that he would ask me out; that the next Saturday we'd go out on the best first date ever; and by Monday we'd be getting the 8.21am together - before travelling further afield on this dream trip.

With so many people we met saying it sounded like a novel, I got the idea to start writing one. We had a lot of downtime on this trip after all, and my background is magazine journalism. So in Bangkok I bought a teeny tiny laptop and started scribbling away.

Me in the third person
It was strange to write about myself in the third person - but I felt more comfortable leaping out of myself and writing about someone else. So the nervous girl on the train became Maya; Mark became James (but still Train Man), and although much of our lives were similar to the characters that were evolving on the Word document, in their fictionalised form Maya and James could become bigger and cooler versions of us; I could exaggerate their stories… and feel less self-conscious.

The book was half finished when we got home, got married and had our first, then second baby - so it went on the backburner, and I went back to my job freelancing for magazines. I couldn't shake the note though - especially when we would re-tell the story (now even juicier and met with even bigger "Ahhhs" thanks to the whole marriage and babies epilogue).

As my babies napped, I went back to the novel, and set about getting an agent. I polished the first three chapters, sent them to an agent who represented authors I loved, and she called me in for a two-hour meeting at which she was full of advice and ideas. She said Maya needed more drama in her life. And a kickass best friend. Train Man was too one-dimensional, let's get inside his head too. Don't have Maya working for magazines, it's too Devil Wears Prada - set it in another industry. Oh, and can you make Maya a bit more likeable? Gulp.

I walked out feeling both drained and elated - mainly that she had so much faith in my writing, but exhausted at the prospect of the long road ahead. The takeaway that stuck with me most was: don't be so self-conscious. The agent's wisdom and advice had given me permission to base the novel on my life, but also to run away with the story, to throw in some red herrings, to have fun.

I worked hard and made the edits (although Train Man was always going to be tall, dark, handsome and thoughtful, with a dimple in his left cheek - that was non-negotiable). But when the manuscript was ready, the agent's circumstances had changed, and I had to look for new representation.

Mad months
My luckiest break - Train Man aside - was when I bumped into agent and all-round shining star Rebecca Ritchie at a pitching event and she took me on. With a few more edits under Rebecca's advice we called it The Note, signed a deal with Head of Zeus, and before too long had a bestseller on our hands. A mad few months followed of newspaper and magazine interviews; I went on This Morning and Woman's Hour - The Note seemed to resonate with a lot of people - and I soon had kind messages from strangers who also wanted to make a leap to change their circumstances. 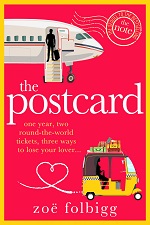 The sequel, The Postcard, is based on that year-long trip Train Man and I took and on the characters we met. Second time around with this story and I've been even more comfortable with taking the juiciest bits of our trip (a Thai detox spa from hell; a snake restaurant in Vietnam; sleeping in a coffin on the shelf of a night bus in India) and mixing them with fiction. Perhaps knowing The Note had done so well gave me the confidence to run away with it. But I'd also met other authors in the meantime who had walked the "faction" tightrope with style and verve: among them Janet Hoggarth with The Single Mums' Mansion and Emmy Abrahamson with How To Fall In Love With A Man Who Lives In A Bush. We had all written novels based on our own experiences, and managed to fictionalise them just enough to leap out of ourselves, yet keep the real-life hook of a story that has "something".

Returning to Maya and James' journey in writing The Postcard also let me reminisce about the early days of my own relationship with Train Man - the note that started it all - and also ponder where I might take the characters in the future. I've left The Postcard with an ending that offers potential for lots of exciting roads ahead - which is also a nice escape from the reality of domesticity, and I've learned that the blurred world between real life and fiction is a fun one to explore!