A beautiful word for consumers - a terrifying one for publishers

The word is 'free': Michelle Paver's agent Peter Cox explains how a free audiobook of her latest title on YouTube is driving sales 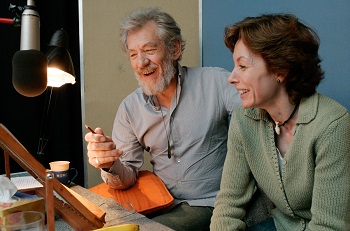 Giving away the audiobook for Michelle Paver’s Viper's Daughter – read by Sir Ian McKellen, no less – may seem like a dumb idea to most publishers, but Head of Zeus are not most publishers.

I’ve been generally disappointed in audiobook sales this past year. I would have expected them to surge, given lockdown, and the fact that most of us now spend our entire working life AND recreational time in front of a computer. Surely a bit of "me" time with your iPod and a nice piece of escapist fiction would be just the ticket?

Apparently not. Everyone who tells me about these things says that, because people aren’t commuting, they’re not buying audiobooks. Personally, I think that’s an abject failing on the part of Amazon’s Audible. Having claimed the market for their own, they’ve now grown flabby. They’ve allowed (free) podcasts to claim market share from (paid) audiobooks. It doesn’t matter a jot to Amazon’s bottom line, but it matters like heck to me and my authors.

So what we’re doing is fighting fire with fire. We’re giving Viper's Daughter away free, too. But there are conditions.

First, the entire work (eight hours) is being divided into four instalments, of about two hours each. Most people won’t listen to more than two hours at one sitting, so there’s no loss there.

Next, we’re setting each instalment to go up on YouTube as a "Premiere", so fans can watch the countdown, and chat with each other when it goes live (6pm every Tuesday).

Each instalment will be available only for a week, then will be replaced with the next one. The detail of the execution is very important, too. Each chapter of the book is carefully marked as a YouTube chapter, with a timestamp. Which means that you can immediately find your place, and not get lost.

Each chapter also has a distinctive looping video background, for the same reason. And here comes the sales pitch. On screen all the time is a link to the (Amazon, of course) buy page. Not in some weird URL-speak. But in English. "Read.VipersDaughter.Com" is easy to remember and type into a browser. Try it!

I’m encouraged enough by the preliminary results to want to repeat the exercise with the next book in the series, Skin Taker. In fact, we’ve already got the short link set up: "Read.SkinTaker.Today" is the link. The Today domains are not particularly expensive, and rather more memorable than dot coms I think. I recommend authors and publishers experiment creatively with web redirects like this, and hammer them home in advertising as much as they can.