A lifetime of writing

Ian Brown, author of the Albert the tortoise picture book series, recalls a lifetime of writing 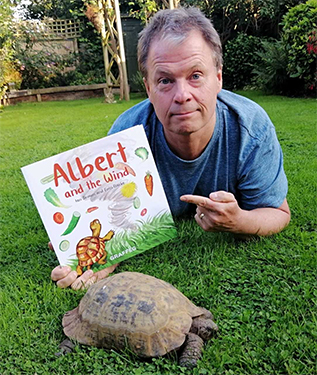 Does it sound grand to say I have always written? It took me thirty years to get published, but now the second in the series of Albert the tortoise picture books is launching.

One of my earliest memories is winning a prize for writing - and drawing. I was about 5 years old. It was a story about how milk became chocolate for a competition run by Cadbury's. The prize was chocolates and a certificate. My drawing was not that good. Fortunately, I've teamed with illustrator Eoin Clarke for Albert Upside Down and now Albert and the Wind. His pictures are definitely superior.

From my chocolatey start, aside from school work I wrote poetry, nonsense rhymes, stories and daft adventures. My first paid writing came as a journalist. Aged 19, I trained for a year at, then, Harlow Technical College. Piers Morgan trained there too. (Not with me.) The course gave a grounding in typing, how government and courts work, libel and dreaded shorthand.

From there to The Herts Advertiser series based in St Albans, Hertfordshire, covering the city and a large surrounding area. We would report on everything we could. Golden weddings, country shows, magistrates' court, parish councils, county council, crime - dashing to wherever tip-offs would lead us. Turning out dozens of stories and thousands of words a week satisfied my desire to write. But I still wrote creatively, and started the quest for that elusive book deal.

After a spell on nationals as a sub editor, I moved into television as a researcher and then a writer and producer. Now I was turning out dozens of pages of script each week, putting hundreds of words into the mouths of household names, but still trying to get books published in between contracts.

Thankfully, earlier this year, the first Albert adventure - Albert Upside Down - was published by Graffeg. Now, with the launch of Albert and the Wind, it's a book series with two more set for next year and more on the horizon. The stories are all inspired by our family pet tortoise, also called Albert. He can genuinely find himself upside down if he over-reaches and - as in his windy adventure - his food will get blown away on blustery days.

My approach to the books is the same as for newspapers and TV: once I have enough ideas, I write the story. For newspapers or TV, I would be making a story from gathered information. For the books, it's collected ideas.

To my amazement, the Albert books - so far - have come to me almost fully-formed. Because it's for picture books, I'm also thinking of the visuals Eoin might create. We consult once the story is fairly advanced. We've tried to make the books have the feel of those we liked as children.

It's a long way - and yet not that far - from my first efforts aged five. Making a story with pictures. I enjoy it, but do look on it as a job. What a great job! Still writing.

Albert and the Wind, the follow-up to Albert Upside Down, written by Ian Brown and illustrated by Eoin Clarke, is published by Graffeg today (14 October)