A rollercoaster called Romanov: the joys of hidden historical heroines 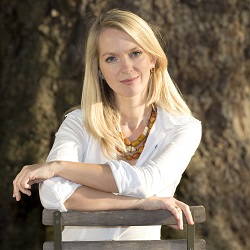 Writing Tsarina and The Tsarina's Daughter allowed me to live a writer's dream: discovering hitherto unexploited, larger-than-life characters, who roam an equally unexplored setting. In his TED talk, the literary agent Jonny Geller says: "Readers are looking for a journey, from a place where they have not been, to a place they know not where..." It's the same for an author.

My ladies are like Tutankhmun: the Tsars preceding them, such as Ivan the Terrible and Peter the Great, and succeeding them - Catherine the Great and the tragic last Tsar - caused them to slide into obscurity. I believe my hidden historical heroines were waiting for me, possibly because Germans and Russians share a millennial history (my father grew up in the GDR), or because they lived as raw and fearless as I would like my writing to be. These women survive wars, vicious jealousies and court intrigues, making for an epic cloaked in ice and snow. The brief reign of my Tsarina Catherine I was understandably overshadowed by her husband Peter the Great and later by her namesake, Catherine the Great. That Elizabeth, the jaw-droppingly gorgeous and courageous heroine of The Tsarina's Daughter, has been hitherto ignored by literature, is an unbelievable stroke of luck.

The years following Peter the Great's death set the stage for a brutal battle for the throne of Russia - the struggle for survival of an entire nation. The background to my novel was like a loom a thousand strands strong, apt to weave a tapestry grand enough to fill the walls of the Winter Palace. Yet this background ought not to weigh on the story, but help it to float instead. To use a skating analogy: the setting is the Rhythm Dance, while the fleshing out of the characters and the creation of a pacey, fresh story is the Free Dance. 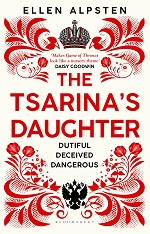 If Tsarina rose from rags to riches, morphing from serf to Empress, her daughter Elizabeth, the only survivor of Peter the Great's 15 children, experienced the opposite, but rose again from rags to Romanov in one rollercoaster of a wild, seductive ride. In daring and bravery, she was ahead of her time. Not yet 20 on her parents' death, "Europe's most lovely Princess" - Louis Caravaque paints her looking like a young Marilyn Monroe, dewy-eyed and rosy-cheeked - found herself impecunious and isolated. Given the choice between a third-rate match - when neither the marriage of her sister or her numerous cousins inspired her to place much confidence in marital relations - or to retreat to a nunnery, with a maimed and babbling hunchback dwarf as her sole company, Elizabeth did neither.

Even though she was semi-schooled - despite her father's ambitions for Russia's scholastic progress - she displayed huge emotional intelligence, which made "meeting" her such a privilege. For a decade, she survived by the skin of her teeth, relying on her charm - which kept a small, but essential band of followers by her side - as well as her cunning, forever balancing the relationship with a jealous, older, and less popular Tsarina.

Her character reflects the stark contrasts of the Slavic soul. Despite being born into the imperial family ruling the world's largest and wealthiest realm and growing up in dozens of palaces that were dotted all over the countryside and the cities, she won hearts by favouring the simpler things in a Russian's life, such as countryside, camping out in the wild and joining the peasants' dances, singing their often-crude songs. While her favourite outfit was a man's riding habit (the breeches showed off her long, shapely legs and curvy hips), she was the owner at her death of 15,000 gemstone-encrusted gowns, and even passed a law which allowed only her to wear pale pink, a colour especially flattering to her.

Elizabeth was a devout Russian Orthodox and performed countless pilgrimages on foot to monasteries all over the country, yet she unashamedly enjoyed her sensuous passions: oblivious to her reputation, she took lovers, shocking both Russians and foreign envoys. Finally, she settled in a most unlikely relationship when meeting the love of her life. She won her parents' throne in a military coup, but abhorred bloodshed and swore never to sign a death penalty. Even though her father had executed her half-brother, she valued family above all else, adoring her sister, and later in life honouring a promise she made her one-time fiancé on his deathbed. Despite the seemingly inescapable pressures of her time, she remained unmarried, accepting her childlessness as the price to pay for her independence.

Discovering and describing my leading lady's eye-wateringly seductive character provides me with the same joy, and the same jolt, as spotting naughty graffiti among the ruins of Pompeii: time holds its breath, and history smiles, and winks at me, citing the great French sociologist Pierre Bourdieu: plus ça change, plus ça reste pareil. The more it changes, the more it stays the same.

Tsarina by Ellen Alpsten is out in paperback from Bloomsbury, which publishes The Tsarina's Daughter on 8 July.