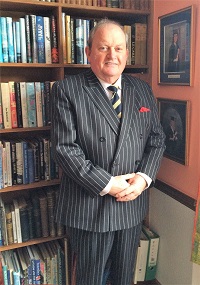 "Why a revised edition now, four years after the first one?" is a legitimate question.

Before I deal with recent developments in immigration law and practice and the wider international and social context from which they derive, it may be helpful to describe the book. It is not yet another boring and self-important memoir from a pompous judge. It is intended to be entertaining, with anecdotes of my time in the Lord Chancellor's Department in the House of Lords, as chief executive of the Royal Courts of Justice in the Strand, my 22 years in the Royal Naval Reserve at sea and afloat, my time in Hong Kong, where I was the legal adviser on the handover to China, and my 16 years as an immigration judge, when I was lucky to be voted by my colleagues to be the president of the Council of Immigration Judges for the UK, a sort of trade union rep for the judiciary.

As I recall in the book, I was the first judge to hold that a potential victim of FGM was entitled to refugee status here in the UK. I was proud, too, of a case involving a 17-year-old Jamaican girl who was about to be sent back to Jamaica, having been smuggled in aged 11. She had no realistic case in law. However, she was an impressive and intelligent girl. I told the Home Office barrister that I had been to Jamaica and could envisage the life she would lead there, all that education wasted. I asked him to seek instructions as to whether this case should proceed. He returned 30 minutes later to announce that the Home Office was conceding the appeal. Everyone in court, including the judge, burst into tears.

That said, I was acutely aware that there were those seeking to play the system by deceit. The task was to identify who was telling the truth and who was lying. The consequences of getting it wrong could have been catastrophic.

I analyse the duties of a judge and the importance of careful preparation and courtesy. As Seneca observed, "Invective against a man in his trial is disgraceful." I explain why we need immigrants as well as immigration control. I attempt to analyse the complex domestic and international law, and to discuss the plight of migrants and international politics, especially in the Middle East.

I also recall my mistakes, including one that compelled me to own up to Lord Chancellor Hailsham. He was, he told me later, impressed.

Owing to a poor briefing, I nearly ran a minesweeper aground at night off Portugal, only saved because I checked the position by radar. In his foreword, Lord (Peter) Hennessy is kind enough to describe me as having a vivid pen, and able to make the hidden wiring of Whitehall buzz. Another passage in the book concerns my time as chief executive of a mildly shambolic Royal Courts of Justice, when I worked over 80 hours a week to turn it round. I feel now I was one of Dominic Cummings' "weirdos", able to manage large organisations without the usual Civil Service qualification of a first in Greats from Oxford!

In the last four years a harsh Home Office regime has been further complicated by ridiculously complex immigration rules and statutes, sometimes utterly baffling and at others contradictory. Amendments to the rules sometimes came monthly, causing confusion to hard-pressed and underpaid lawyers and their clients. No wonder the Court of Appeal has complained about the "impenetrable law". I give lurid examples in the book.

The Immigration Act 2016 provided for tough measures against illegal immigrants. Even a human rights appeal was barred if the Home Office certified that the appeal was "manifestly unfounded". A tick box culture prevailed, with discretion limited. The Home Office officials, often junior and poorly trained, believed that if an applicant had no passport, that person must be illegal. Many immigration appeals are no longer allowed. Legal aid has been cut back so much that many appellants have no representative at all. It is so important in cases like these to be patient. I describe recent and sometimes contradictory cases in the higher courts.

This edition not only brings the sad Hong Kong situation to date but examines government proposals and practice in relation to Channel migrants, a points-based system, and even, as proposed in some quarters, an amnesty for illegal immigrants here.

I was appointed to the Windrush Lessons Learned Review. After a year doing extensive pro bono work, we published our report recently. There is a new chapter on the plight of these poorly treated and yet dignified people.

The book is personal too - I write about my family, serious sailing and travel. My time in Hong Kong was so helpful for a subsequent career as an immigration judge, and I recall the clever and intellectual Chinese people I worked with in Hong Kong and elsewhere, including the UN. Meeting and working with people like this is humbling, making one realise that not all we do in applying our law is actually the best way of working. I tried to be a good and fair judge.

This book is supposed to be both interesting and informative, but also thought-provoking and amusing. It is ideal reading in these turbulent and frightening times.