'The thing that I think everyone most wants to read at the moment is funny writing - truly funny, properly laugh-out-loud children's books' 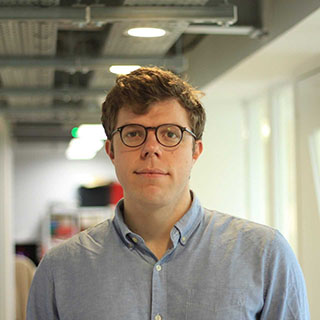 How did you get into publishing?
I started at Nosy Crow about 10 and a half years ago, and found my way there entirely thanks to several kinds of luck, really. At the time I was in my last year of an English Literature degree and came home to London in the spring with a vague plan to revise for my final exams. I'd spent the previous few months emailing publishing companies about internships, and I happened to come across Nosy Crow - a very new and small company at the time - on Twitter. They offered me a few weeks of work experience, and after that I managed to convince the company's managing director to let me come back after I'd sat my finals. And then, amazingly, they offered me a job.

I was incredibly lucky to have found Nosy Crow when I did for all sorts of reasons. Because they were still so small and new, I wasn't yet competing for an entry-level job against hundreds of other applicants. More significantly, though, my route into publishing was possible because I was in the very privileged position of having somewhere in London where I could live for free while I did work experience - which I recognise is a situation that, when it replicates on an institutional level, creates huge problems in our industry. I'm very glad that Nosy Crow has, for several years now, paid the London Living Wage for all of our internships - and that there are schemes like the Spare Room Project that aim to lower the barriers to entry for people looking to start a career in publishing.

We want to do as much as we can at Nosy Crow to broaden access into publishing and demystify the industry, and for the past couple of years my colleague Frances Sleigh has organised a series of free 'introduction to children's publishing' events aimed at doing that - you can watch one of the lockdown editions of the event, which took place over Zoom, here: https://www.youtube.com/watch?v=8PoSDEcTQAU.

How did lockdown change the way you do your job?
It feels sort of appallingly oblivious to say 'not much', but in many ways that has been the case for me. I've been incredibly lucky not to have to juggle work with home-schooling, as many people in the industry have had to, and I'm very fortunate to have space at home where I can work comfortably. And lockdown hasn't changed many of the fundamental aspects of what I do - editing a book is still editing a book, whether it's being done from home or in an office, and it is by nature already a fairly solitary activity.

The parts of the job that have changed the most for me are the collaborative elements. While I can do the actual hands-on editing perfectly happily from home, I've found the work that requires interaction with other people to be much more of a challenge - and although platforms like Zoom have made an enormous difference, I remain a firm believer that they are not an adequate substitute for in-person discussion. And the things that Zoom can't begin to replicate are the small, incidental moments - the chance encounters and casual conversations in a shared environment - which it turns out contribute an enormous amount to the way we all work and the culture of a company.

In a kind of ludicrously millennial and trivial way, the thing that lockdown has changed the most for me is that it has made me much less hostile to phone calls: in pre-pandemic days I would avoid them at all costs, whereas now I actively look forward to them.

Are there any recent pieces of publishing that have really impressed you?
Oh, there are loads of pieces of publishing that have impressed me - I constantly find myself amazed at what other people have achieved. Last year I thought that Rob Biddulph's #DrawWithRob campaign and Katherine Rundell's The Book of Hopes anthology were inspirational responses to what was happening in the world, and I was also very proud (even though I played no real part in its creation) of the book that Nosy Crow created with incredible speed and distributed for free, Coronavirus: A Book for Children, an illustrated non-fiction title explaining the pandemic for children, with artwork by Axel Scheffler - it has been read and downloaded millions of times.

I think that what Knights Of have been doing has been extraordinary (and necessary) - and their run of successes recently, with the Carnegie Medal, the Waterstones Children's Book Prize, and more, has been both hugely impressive and truly deserved. More recently, if I had to pick particular titles, I've been really impressed by Penguin's campaign for The Upper World, all of the activity around Macmillan's brilliant Marcus Rashford book, and Usborne's launch of Ace of Spades.

And if I could name a couple of my own books, in the last couple of months I've been incredibly proud to share The Secret Detectives by Ella Risbridger and Adam-2 by Alastair Chisholm, both of which I think the whole Nosy Crow team have published brilliantly.

What are you currently looking for?
I am not very good at answering this question, because generally speaking the submissions that I find the most exciting are the ones that surprise me - and however much I might say to myself that what I want to see is X and what I don't want to see is Y, it’s always the story or idea or voice or genre that I'm not expecting that I respond to most strongly.

That being said, every editor has a wish list of one sort or another. It's not exactly an imaginative answer, but the thing that I think everyone most wants to read at the moment is funny writing - and truly funny, properly laugh-out-loud children's books, which also have a real plot and are funny for children and not just adults, are sort of a holy grail, and so I'm constantly looking for those (as is everyone...).

Middle grade fantasy is complicated at the moment: when it's done well, it tends to be the genre with the most potential, particularly in terms of international sales, but it's also the most crowded space right now, which means that it's incredibly difficult for anything new to break out - and so while I always want to see exciting and original new stories in that space, it does also feel like the area with the highest barrier to entry.

I've been really interested in the growth in children's graphic novels over the past few years - they’re not a format that Nosy Crow has published in previously, but I would love to start.

And I'm particularly keen to see fiction submissions from writers of colour - so much has already been said about the need for better representation in children's books, both on the page and behind it, and I am not sure that I have anything to add to the discussion itself, beyond reiterating its utmost importance, and so I am more interested in thinking about the steps I can take to try to improve things. I have an open (and open-ended) submissions policy specifically for writers of colour, and I would love to see any middle grade from all writers of colour: submissions can be sent directly to tom@nosycrow.com. I try to send feedback to everyone, but it can take a while - and if you don't hear from me within six weeks, please do chase.

Are there any industry trends that you've noticed lately?
In some ways what I've been most struck by over the past year has been the absence of particular trends - a few months into the pandemic I had been expecting - with no small feeling of dread - to start seeing endless lockdown or Covid-themed submissions, for which I have no real appetite, and in fact I don't think I've received any yet. I suspect that may largely be because they aren't being taken on by agents, rather than because they aren't being written, though.

Generally speaking I subscribe to the idea that nobody knows anything, so in the same way that I'm not terribly good at describing what I'm looking for, I'm also pretty rubbish at making predictions about upcoming trends. That being said, I do think (as above) that we'll continue to see more and more graphic novels for children. It's impossible to ignore the way that middle grade has grown over the past few years, and the overall size and shape of that bit of the market is certainly the development that I watch most closely - but I couldn't say with any real confidence what direction it is heading in.

I've been encouraged recently by a bit of a resurgence in science fiction in middle grade - for years it was seen as being a hard genre to sell, and I'm pleased to see that slowly changing. And on a much smaller scale, I've been struck by a sort of micro-trend recently for fiction on the subject of time and time travel of one sort or another - The Upper World is one recent, big example, and I'm incredibly proud to be publishing two very different books next year which both explore this idea in separate ways - Running out of Time by Simon Fox, and The Consequence Girl by Alastair Chisholm.

And finally, 'trend' is not the right term for it at all, but I do hope and believe that we'll continue to see a growing number of books being published from writers from marginalised and diverse backgrounds - as an industry we have a long way to go here.