Philippa Harrison, former head of Little Brown and Macmillan, is already receiving acclaim for her authorial debut Mountain Republic, a social history of Crosthwaite Parish in the Lake District. Her experience has had its uses, she writes 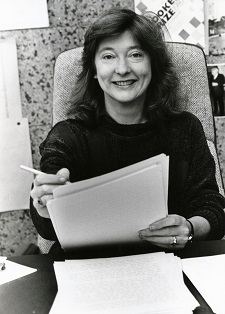 Some years after I had retired from running Little Brown UK, the company I had launched from the remains of Robert Maxwell's general publishing empire, I started to research the history of the Lake District. It is a place part of my family has been involved in since the 15th century; the place where I was born, and within which Anthony McConnell and I had bought a house. Until that moment it had never entered my head, for even a second, that I would ever try to become an author, let alone the author of a breeze block that Hunter Davies would welcome as "a unique contribution to English history". I saw myself as a publisher, and still do. Would that make me an author from hell? Probably, as, unlike most first-time authors, if I were to feel seriously disturbed about anything I would be likely to have the professional confidence to raise it.

On the other hand, I knew I was responsible for the effects of my conscious decision not to learn to type - so as not to be type-cast - well over 50 years ago, along with a concomitant and prodigious lack of knowledge of how computers worked (any publishing ex-colleague of mine would happily underline that!). While obviously a considerable burden for me as I attempted to fulfil my new ambition (I was half way through my first draft before I realised you could access material through using a key-word within it), I fully understood that it would be a burden for the publisher too. And it was up to me to find a solution that helped.

So, when Covid made an original publication date last year unnecessary (there would have been three actively relevant anniversaries to coincide with the original date), I thought I could use my experience to mitigate the extra work for the publisher caused by my lack of proficiency and help my book.  My learning curve had been experiencing the value of meticulous fact checking and questioning, a more serious acquaintance with grammar than my own, and a vital ballast to my lack of real knowledge of 14th-century English history - a period that had never made a serious appearance in my own education - which allowed me to re-write the dodgy bit of that chapter. The ms had not got shorter and therefore had taken up much editorial time, so instead of lumbering my editor with the chore of interpolating all my editorial responses to his edit electronically (we both knew I was certainly not safe to do that), I volunteered to find a.n.other to do it.

This allowed Mountain Republic to have two edits. Having delivered the book a year earlier, I was sufficiently divorced from it to allow me now to apply my own editorial skills, essentially ensuring that each theme was sufficiently covered at the relevant chronological stage and condensing and moving material to improve the flow of the narrative. Few books have had the potential benefit of two symbiotic editorial takes on it, and initial reaction to the proof, both about scholarship and style, suggest that there may be some plusses for the publisher of the author being a publisher too after all.

Photo: Philippa Harrison when she was publisher at Michael Joseph; she had just published Miss Piggy's Guide to Life.