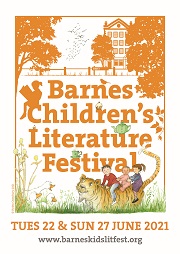 Julia Donaldson and Michael Morpurgo will star at headline events on 26 June at the Barnes Children's Literature Festival, which the organisers say will be the first UK literary festival to return to live events. Other stars appearing over the course of the festival weekend include Jacqueline Wilson, Axel Scheffler, Lauren Child, Julian Clary and David Roberts, Lydia Monks, David Almond, Frank Cottrell-Boyce, Maz Evans, and Sarah McIntyre and Philip Reeve. There will also be a rare appearance by Helen Oxenbury, who has designed the festival poster in memory of the late Judith Kerr.

Barnes' primary school programme takes place on Thursday 17 and Friday 25 June, with the public programme following on 26 and 27 June.

Festival director Amanda Brettargh said: "We've got plenty of room to move here in Barnes and we're confident we can deliver the maximum amount of book fun and keep families, authors, illustrators, performers and volunteers safe.

"This has been a really tough year for so many people, and Zoom has been a life saver. It's opened doors that we didn't have before and we've all learned so much but we strongly believe that we can build something better. And for those who feel ready and safe to do so, it's time for normal festival life to resume. It's time to get those kids back in the room for some fun with books."