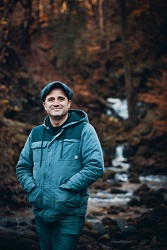 Barrington Stoke is announcing the acquisition of 'a touching adventure from Phil Earle about a four-legged hero who risks it all to make his best friend’s dreams come true, inspired by real life stories.'

World rights to The Dog That Saved the World (Cup) by Phil Earle have been acquired by Ailsa Bathgate, editorial director of Barrington Stoke, from Jodie Hodges of United Agents.

The acquisition statement continues: 'The only thing that Pickles loves more than football is his best friend, and owner, Elsie. But life off the pitch is tough, even though Dad works hard to provide for them. It’s their team of three against the world and right now it feels like their side is losing.

'With the announcement that the World Cup is coming home to England and that Elsie’s team might have the chance to play at Wembley Stadium, she couldn’t be more excited. But when disaster strikes, her dreams are shattered and it looks like it’s up to Pickles to save the world (cup)...

'The Dog That Saved the World (Cup) will publish in March 2021 with illustrations by Elisa Paganelli. Written with sensitivity and honesty, Earle was inspired to explore the issue of poverty and homelessness for a young-reader audience in part because of the story of Fara Williams, one of England’s most- capped footballers, who was homeless for more than six years and is now ambassador for the Homeless World Cup.'

Earle (pictured) said: "This book feels like the perfect encapsulation of why I write. I truly believe that we are surrounded by stories everyday of our lives. We pass them on the street, sit next to them on the bus, they hide in newspapers and in the pages of history. So I’m thrilled that Barrington Stoke has allowed me to mash two real life happenings into one story.

"I’ve long been tickled by the story of Pickles the dog, who in finding the stolen World Cup trophy in 1966, solved a crime that the finest minds of Scotland Yard couldn’t. But I was also hugely moved by the life of Fara Williams, England Lionesses most-capped footballer, who for more than six years of her playing career, was homeless. Her tenacity on the pitch is always something to behold, but such bravery off it? I felt compelled to pay tribute to her, and really hope that I’ve done it justice in The Dog That Saved The World (Cup). This is my fifth book with Barrington Stoke and, as always, to work with them is a real privilege."

Bathgate said: "As well as offering a form of entertainment and escape, books are an incredibly powerful way to let children explore and learn about the world in which we live, and to see their own realities reflected. One tragic aspect of our current reality is that homelessness is a problem facing increasing numbers of children today, and it’s often a hidden issue, with families ending up in unsuitable and unsafe temporary accommodation. This isn’t an easy subject to address in a book aimed at 8 to 12 year olds, but Phil has done an incredible job with a story that will inspire empathy and understanding, offer hope and even a little humour as it’s told from the perspective of a very special dog."