Blackwell’s reveals 2020 Book of the Year 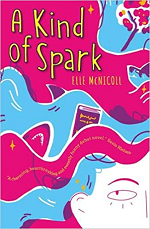 Published by Knights Of, A Kind of Spark tells the story of 11-year-old Addie as she campaigns for a memorial in memory of the witch trials that took place in her Scottish hometown.

According to Blackwell's: 'Elle McNicoll is a Scottish and neurodivergent author who wrote this book – her first – after growing tired of the lack of inclusivity in the industry. The novel stars two autistic young women.'

Coenraads said: "I got so much out of A Kind of Spark – perspective, empathy, joy – it is a book that will live with me for a very long time. I feel passionately that I would love to put a copy into the hands of every customer that passes through our doors."

Elle McNicoll said: "I am staggered by the support and generosity from Blackwell’s and their booksellers. To see a children’s book win Book of the Year is an overwhelming and wonderful thing. Thank you so much."

Eishar Brar, Knights Of editorial director, said: "We’re over the moon for Elle - to have her debut recognised by Blackwell’s is a hugely exciting moment. Thank you to all the booksellers, and the judges, who continue to champion A Kind of Spark."

Previous winners of the Blackwell’s Book of the Year include The Establishment by Owen Jones, Good Night Stories for Rebel Girls by Elena Favilli and Francesca Cavallo, 10 Minutes 38 Seconds in This Strange World by Elif Shafak and Everything Under by Daisy Johnson.