Pandemic, family turmoil, back pain: time to write my novel

Brian Klein had long nurtured an idea for a conspiracy thriller. With work on Top Gear and other projects suspended, it was now or never 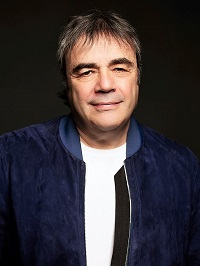 When Boris called the first national lockdown, on 23 March 2020, together with millions of people across the country I felt bereft and devasted. My bulging work diary emptied overnight. A busy television director with suddenly nothing to direct. I was just four days away from shooting a Netflix comedy special and weeks away from directing a prime-time chat show for Sky, a new series of Top Gear, and a BBC Maestro special with world-renowned chef Marco-Pierre White.

My personal life was also thrown upside down, as our daughter announced she was moving back home with her new dog, which meant my wife and I suddenly inherited a lockdown puppy. Within twenty-four hours of their moving in, I pulled a muscle in my back while simply emptying a rubbish bag into an outside bin. Any movement was sheer agony. I couldn't stand or walk properly, and was confined to rest on the couch in the living room. The question was, could things get any worse?

Well, it was then I decided I had nothing to lose by having a crack at writing, even though I'd never written anything meaningful before. The basic idea for The Counterfeit Candidate had been buried deep inside my head for over 25 years, but I'd never been brave or confident enough, or indeed had the time, to try to write it. In the end, it took the totally unexpected arrival of a pandemic and the first lockdown to turn the idea into a reality.

I've always been fascinated and intrigued by conspiracy theories. JFK's assassination, the Moon landings, Princess Diana's car crash all come to mind. But they don't come much bigger or more controversial than the apparent suicides of Adolf Hitler and Eva Braun in the Fuhrer's notorious bunker in war-torn Berlin on 30th April 1945. It's a highly contentious event, and even today views differ on what really happened.

As a student, I studied Hitler and the Third Reich at Queen Mary College, where I completed a degree in History and Modern Politics. I've always had a gut feeling that Hitler wasn't the kind of man to take his own life; then again, there is a great deal of compelling evidence, and eye-witness testimony, to suggest he did. But for the purposes of writing The Counterfeit Candidate, I went with my gut. I couldn't help wondering, "What if…."

What if Hitler escaped from Berlin at the end of the war and built a new life, using a false identity, and perpetuated his dynasty. How would that singular event change the course of history and affect the lives of millions of people around the world?

The Counterfeit Candidate runs on two timelines. One follows the story of Hitler and Eva Braun as they build a secret new life in Patagonia, where plans are made to create a future Fourth Reich based in the United States.

The contemporary part of the story is set in January 2012, and features a spectacular bank heist at a safe depository in Buenos Aires. The audacious thieves have no idea that the contents of Box 1321, one of 90 raided in the robbery, include original documentation and film that conceal an incredible historical truth. The robbers are hunted down in a blood-soaked manhunt in pursuit of the explosive materials.

I thought I would begin my research by finding a real bank in Buenos Aires that housed a vault with a safe depository, and was truly astonished when my initial google search threw up the fact that in January 2011 the Banco Provincia was the victim of one of the biggest safe deposit heists of all time. Thieves tunneled their way in and escaped with an estimated hundred million dollars' worth of merchandise. It was a bizarre feeling, as I'd had the idea for the robbery 15 years before it happened in real life!

That was a key moment, as it inspired me to begin the writing process. For the following 12 weeks, I became totally obsessed, working 10 hours a day, seven days a week. My only escape from constant writing was a daily, late night walk with the lockdown puppy, Georgie, a gorgeous Frenchador (yes, a Labrador/French Bulldog combo!), who became my thinking companion when I wanted to explore plot lines.

The result was a 90,000-word first draft. When I had begun the project, I had no idea if I was capable of completing it, and - trust me when I say - no one was more surprised than I that the book actually got written.

The fact that the phone and the doorbell never rang, and that work emails dropped off to zero, meant I had no distractions. Every day blended into the next. Weekdays and weekends were identical. I just ignored Boris's daily press conferences and spent every waking hour either carrying out research or writing.

Almost as challenging as writing the book was securing a literary agent and subsequently a publisher. But after countless rejections I managed it, and here we are!

The Counterfeit Candidate, the debut thriller by Top Gear director Brian Klein, is out from Best Level Books today (15 July) at £8.99.