The countdown to the opening in September 2013 of the new Library of Birmingham has begun. BookBrunch meets Brian Gambles, Project Director and Assistant Director of Culture at Birmingham City Council, to learn about this all-consuming project and about his belief in the importance of libraries as community meeting places. 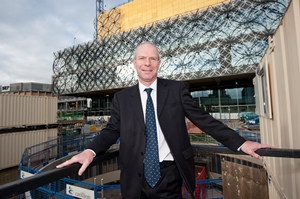 For the past couple of years, news from the public library world has been unremittingly grim, as councillors and campaigners lock horns over the future of local libraries and authors and readers lock arms in an attempt to stave off the apocalypse. Meanwhile, in Britain's second city the ribbon-cutting ceremony for the £188.8m Library of Birmingham is fast approaching, and, when the last of the builders and contractors departs, the task of moving 1.5m volumes, plus a vast collection of archives and 3m photographic images, will begin.

Brian Gambles, Project Director, seems pretty calm in the face us such daunting statistics - after all, most of us get apoplectic as we contemplate the reorganisation of our home bookshelves. "We've recruited specialist contractors," he explains. "The real challenge is not the physical move but getting the destination planning and strategy right - and making sure you don't lose anything. It all has to be done to incredible levels of detail." The present library will close a few months ahead of the new one's opening on 3 September 2013, when the first of the 3.5m people who visit annually will step into a foyer that will also be the gateway to Birmingham Repertory Theatre.

It is indeed a grand projét, though Gambles and his colleagues try to avoid describing it as such. "We prefer to say it's part of the engagement of the community with the Library, its inception, its development and its operation. When people ask me what services we'll have, I only give a partial answer because the Library will change as people engage with it and define what happens within it. You can design a space for such and such, but if people choose to use it differently they will redefine that space. Very much what I hope will happen in creating a library that has a number of very different spaces is that people will occupy and colonise those spaces and start to define how they should be used."

As well as books, photographs and archives, all of which will be housed in specially constructed temperature- and humidity-controlled environments, the Library will be home to "designated status" collections such as the Literature Collection, which includes a copy of Shakespeare's First Folio, as well as work by Milton, Johnson and Cervantes; the Birmingham Collection, which charts every aspect of the city's growth and development; and the Music Collection, which includes unique Handel libretti and correspondence from Elgar. Among the treasures in the Archives and Heritage Service are the Boulton and Watt Archive, said to be the most important in the world on the Industrial Revolution; materials relating to Birmingham Repertory Theatre, which features correspondence with Shaw; and the archive of broadcasting pioneer Charles Parker, creator, with Ewan MacColl, of the celebrated Radio Ballads. The Photography Collection is one of only 12 national collections and the only one located in a public library. Its holdings date back to the earliest years of photography.

The range of services to be offered raises the bar for 21st-century library provision, and, in so doing, makes a case for the library - be it in Birmingham or in Brent - as a hub of the community, a repository not just of books but of knowledge, advice and activity. So while users will have access to books, music, CDs, DVDs, even games, the less bookish in the community will also be drawn to the Library of Birmingham for access to such services as Research, Genealogy, Health Exchange and Business Support, as well as help with job-seeking, CV-writing and gaining qualifications. It will be a meeting place for business, academia and the community. And then there's the programme of events - performance poetry, seminars, storytelling for kids, crafts workshops and exhibitions. Something for everyone, then, within its 31,000 square metres.

As the artist's impression has become a reality, so the Library of Birmingham project has won over doubters. Gambles acknowledges that, in the early days, "some saw it as an elitist project and were angry that so much money was being spent on ‘just a library', especially when times got economically tougher. But that argument's begun to turn around and people are getting excited about the possibilities of the Library - opinion has shifted almost entirely in our favour. We do public tours and I take invited guests round on a regular basis. You can see how stunning it is. People want it to work and they realise that it's got to be ‘owned' by the city. Local media coverage is now 90% positive."

It's surely been a help that there has been a focus during the construction on providing employment to local people. Over 250 long-term local unemployed have been brought back into employment, including 24 homeless on work placements of whom 13 got permanent jobs on site, as well as 75 apprenticeships created, one of whom became a supervisor. Such targets were set out in the building contracts. Work on the site began in January 2010, three years after Cabinet approval was given for the funding package and 12 years after "conversations began about an ambitious cultural new-build".

Gambles admits that had the funding request been three months' later "we wouldn't have got a look-in. It's all local authority funding." Despite "events", there has never been any pressure to "scale back the vision", helped no doubt by advocacy from the Leader of the Council, who was "adamant about the need for a world-class development for a world-class city, one which defines the city for the future". Happily, though the forecasts were for a bill of £193m, the project will be delivered at least  £4.2m below budget.

Long the butt of jokes, a city once defined by Spaghetti Junction - which of course took you past, en route to somewhere else - Birmingham has been steadily remaking itself as a cultural hub in the centre of the country. If the late, unlamented Bullring defined 1960s Birmingham, Symphony Hall - a project made possible when a young Simon Rattle took on the City of Birmingham Symphony Orchestra, made it play like the world's best and dreamed big dreams for it - redefined it for the 1990s. Now, two decades on, comes the gleaming new Library, designed by Dutch architects Mecanoo.

"Birmingham has got this incredible cultural offer at the level of excellence - the CBSO, the Opera, the Ballet, the Hippodrome, the Rep, an international-quality Museum and Library and an incredibly lively cultural scene, a very diverse culinary scene, music and performance art," Gambles continues. "One thing that has always been missing is the architectural dimension, which is something we set out a few years ago to quite deliberately introduce. The Library is part of that, but we need more international-quality buildings by international architects. Despite that cultural offer, Birmingham has never set out to really sell its attractions. The realisation now is that we've got what it takes but we've not been saying it in the right way and the Library is a platform to do that."

So the Library is built, its 10 levels overlooking Centenary Square, its metal façade a reminder that the city it serves was the engine room of the industrial revolution. But most of the industry has gone from Birmingham as it has from all over the UK, outsourced to cheaper workforces. Britain, and Europe, is in a recession with no real end in sight. Belts have been tightened, but Britons have yet to feel the full force of the cuts. So what of budgets? How will the Library of Birmingham, and the city's many local libraries, weather the continuing economic storm?

"We are reducing library budgets but we're not closing any libraries," Gambles states. "There's been an absolute political commitment for saving money across the board. There's always a special argument to be mounted but all services in Birmingham are affected by local authority cuts. However, no library will close." There will, he says, be reductions to both staff and hours in local libraries, but moves to self-service will make them more cost-effective. "It's a very diverse population. Children are always important, especially in Birmingham, where we have a very young population. Indeed, our demographic is getting younger and that's a big challenge - and also a big opportunity. If you're considering the needs of eight-year-olds you don't want to locate libraries distant to the communities where they live." So too 80-year-olds presumably.

He continues: "We'll be offering a much more efficient service and the budget, which has been reduced over the last few years, is being restored to 2007 levels. I'm looking to run an operation that's more commercially realistic and has a much more businesslike approach to generating income. That means, for example, having catering that runs in a professional and businesslike way, a retail operation that generates money", with books and merchandise deriving from the collections. A tourist information centre will also be cash-generative, so too PoD services, "though we'll probably work with a commercial partner".

A fundraising initiative will target foundations and trusts as well as individuals, with some form of donor recognition "engaging people, getting them owning the library in a very tangible sense". But however successful such moves, the Library will always be dependent on a grant from the city.

Debates around whether a public library needs to have on its shelves the latest Jeffrey Archer or Katie Price are "perfectly legitimate. But most of what's been debated is against the provisions of the 1964 Libraries Act, which is incredibly general but dictates that local authorities have to provide a comprehensive library service. If we stopped having, for example, adult fiction, then I don't think you could describe the service as comprehensive. There are always discussions to be had and arguments to be made, but I don't think we can exclude any particular category of material. We have to find clever ways to procure them and clever ways to animate them."  Money can be moved around: online subscriptions to journals, already "significant", will increase, saving money and space, both of which can be reallocated.

For Gambles, who read history at St John's College, Oxford before qualifying as a librarian, and who came to Birmingham 25 years ago having begun his career in his home city of Liverpool, it's both a challenge and an opportunity. "Library jobs don't get any bigger," he smiles. "I really do believe the library service in general terms is at a turning point and needs to change. We need to set a new model. The library as a concept is a place in the community, and the day there are no books physical books there'll still be a library. Because people will still want to access information, to talk to other people, to gain knowledge. And there are many many places, including in Birmingham, where the library is the only community meeting place in the sense of people coming together, a place where anybody can go."

On 5 September, Brian Gambles will take part in a debate on Cultural Regeneration, an event co-hosted by the Library of Birmingham and the RSA and featuring Professor Loretta Lees, journalist Anna Minton and Phil Remond.
Share on Facebook
Share on Twitter
Download PDF