Capturing the flavour of wartime London 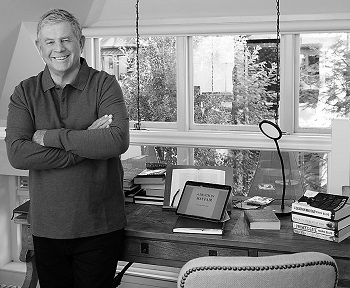 I am the creator of DCI Frank Merlin, a Scotland Yard detective who battles crime in World War II London. There have been four Merlin books to date, the latest of which, A Death In Mayfair, is out today. Here is a brief summary of the previous novels in the series:

Princes Gate (Merlin 1): set in January 1940, the period known as "The Phoney War". Merlin investigates murders at Joseph Kennedy's American Embassy.
Stalin's Gold (Merlin 2): set in September 1940 against the background of the Battle of Britain and the Blitz. Merlin investigates the sudden disappearance of a Polish RAF pilot.
Merlin at War (Merlin 3): set in June 1941 as Hitler invades Russia. Merlin becomes embroiled with murder and espionage among De Gaulle's Free French. 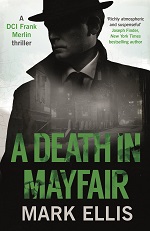 A Death in Mayfair is set in December 1941, the month in which the Japanese attacked Pearl Harbour. A famous film star falls to her death from the terrace of a Mayfair apartment. Not far away, the strangled body of a young girl is discovered in the rubble of a bombed-out building. Merlin investigates.

It is important to me that my stories take place in a wartime London that is as authentic as possible. I hope to recreate as accurately as I can day-to-day life on the home front as the war takes its course. It is also a regular feature of my books that real people appear alongside the fictional characters, and I want their involvement in the stories to be believable. All this requires that I carry out a great deal of research. Here are a few words on how I go about this.

Research is a good deal easier now than when I first thought of writing these books, over 12 years ago. A vast amount of information previously unavailable or difficult to find is now freely available online. When I started researching my first book, I had to make great use of libraries and places such the Public Records Office in Kew. Nowadays I don't really have to leave my desk. Most of what I need can be sourced from the internet or my own now substantial library of WW2 books.

Book sources
Improvements brought by the internet aside, the principal task of my research remains unchanged - intensive reading. London in the war is an excellent historical setting for crime thrillers. The Second World War was a boom time for crime in London and in the country at large. The blackout, the chaos caused by German bombing, the introduction of rationing and the explosion in black market activity - all were factors in the near 60% rise in crime between 1939 and 1945. For knowledge of the wartime crime world, there are a few helpful biographies of gangsters of the time, but there is also excellent detail in some of the comprehensive histories of the period - books such as Wartime Britain 1939-1945 (Juliet Gardiner), London at War (Philip Ziegler) and The People's War: Britain 1939-1945 (Angus Calder).

Such works are also important sources of general wartime information. So too are diaries, which can provide fascinating personal perspectives on life at the time. Published diaries I regularly consult include those of Harold Nicolson, Chips Channon, John Colville (one of Churchill's wartime private secretaries) and General Sir Alan Brooke. Not all the diaries I read are by prominent people like these. There are engaging diarists from ordinary backgrounds, among them the housewife Nella Last, and Colin Perry, a schoolboy in the Blitz. Both provide memorable descriptions of the nitty-gritty of ordinary British life in those difficult times.

I also draw significantly on biographies and memoirs. There are numerous books featuring the wartime experiences of soldiers, politicians, writers, artists and socialites. I plough through as many as I can. Finally, there are the novels of the period. I am currently researching the next Merlin book, the action of which is to take place in the autumn of 1942. The Heat of the Day, Elizabeth Bowen's wartime classic, is set exactly then. Next up is Evelyn Waugh's novel Put Out More Flags, which was written in that year. Other writers generally good on life in the war include Graham Greene, Anthony Powell, Muriel Spark and Henry Green.

Film studios
Moving from the general to the specific, much of the action in A Death In Mayfair revolves around the British film world at the end of 1941. I was particularly drawn to this subject matter when I read somewhere that there were as many as 15 film studios in and around London at the beginning of the war. These included the well-known locations of Pinewood, Ealing and Shepperton, but also more surprising ones, to me at least, such as Isleworth, Southall and Walton on Thames. Many of them managed to continue film-making throughout the war, either commercially or on behalf of the government.

The domestic film industry made an important contribution to cheering up the war-weary British population. Once I decided to make this world the background to the book, I immersed myself in some relevant literature. I read Britain's Forgotten Film Factory:The Story of Isleworth Studios (Ed Harris). I read a marvellous history of British cinema called Shepperton Babylon: The Lost Worlds of British Cinema (Matthew Sweet). I read biographies of leading stars of the time such as Rex Harrison and James Mason, and books about famous producers and impresarios of the day like Alexander Korda and Sam Spiegel. I picked up useful information about how studios were financed and run and how actors, actresses and film executives behaved. I learned also that there would have been plenty for today's Me Too movement to get to grips with in wartime British film studios.

After completing my research, I had a number of storyline ideas for the book. I decided to invent a fictional riverside film studio somewhere to the west of Windsor and people it with principal characters. Then I thought up some crimes for Merlin to get to grips with. Twelve months later, I had the draft manuscript of A Death In Mayfair.

I always approach my research task with enthusiasm, and really enjoy this aspect of the writing job. I hope my efforts result in an acceptable level of authenticity. However, key as the research may be, I think it is very important to deploy it with a light touch. If readers learn interesting facts from my books, all well and good, but the principal aim must always be to entertain, not teach.