Classic crime with a modern makeover

Rachael Blok introduces her new novel, in which a story of contemporary slavery meets a country house mystery 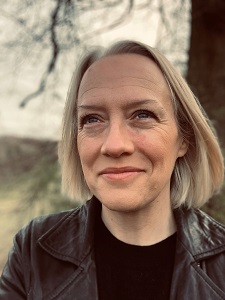 Into the Fire is the third novel in the DCI Jansen series. It's a classic country house novel spanning a three-day weekend celebration, which turns dark and murderous. I grew up reading Agatha Christie, and I was sure DCI Jansen was up to the challenge of a locked-room mystery.

People often ask where writers get their ideas from, and each of my novels has been inspired by something personal. I begin with a single image, which expands slowly as I write. I wrote Under the Ice when I was on maternity leave, feeling the confines of a London flat with a tiny baby. The Scorched Earth began when a friend from school died by suicide in the woods in my home village. There are four narrative voices in Into the Fire, and Iqbal is one of them. His story, and his wife's, are inspired by a real-life Iqbal I met as a child.

I grew up in Durham, but because of high unemployment, my father moved to the Middle East when I was young. He was there for three years, working on building projects, and we went to visit him for chunks of time, staying in officers' houses who were on leave. All these houses had "staff" - mainly from Sri Lanka. Iqbal was one of them, and he often babysat for my sister and me. We were about 6 and we loved him: he'd let us stay up really late, play chess with us and offer us cigarettes. He showed us photos of his family - he had three children and a wife in Sri Lanka, and he rarely got to see them. I've often thought of him, and he came back to me very clearly writing this novel.

Modern slavery
The story of this character is also inspired by the 2013 Rana Plaza disaster, in which 1,100 people died when a fire caused the building to collapse. I've wanted to write for a while about modern slavery and the hidden workforce, who make so many of our cheap clothes and other goods. In the novel, Iqbal used to work in these factories. There are 4,500 factories in Dhaka, and Bangladesh has 4.1 million factory workers. The conditions are far below levels acceptable in the UK.  For example, the rivers in Savar, Dhaka, where Iqbal works, run the colour of the dye the factories are using that week, and the pollution is devastating. 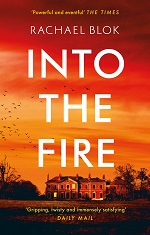 For Into the Fire, I wanted to put my own twist on the country house mystery. As well as feeling classic in structure, I also wanted it to be fresh and fun. The novel is situated around the signing of a Virtual Reality investment deal, so the weekend is celebratory. I think VR resonates even more after lockdown - the idea of being next to someone when you're miles away; of being able to transport yourself to elsewhere. There are high stakes involved, so when the congratulatory atmosphere turns dark, characters have a lot to lose.

As befits a high-stakes investment, the characters are ambitious. Sophie is a Dutch actor, making a name for herself in film. Her husband Filip, one of the investors, is wealthy, but is going through a personal crisis. He's boxed himself into a corner in his relationship. He's desperately in love with Sophie, but has also lost the ability to communicate with her. He's a flawed hero - insecure, and yet also willing to risk his life to save others.

Outsider hero
In the series, DCI Maarten Jansen, originally from Rotterdam, is the outsider in the very middle-class city of St Albans. My husband is half-Dutch: his family are originally from Delft. We've visited The Netherlands frequently. For me, part of DCI Jansen's charm is how much he struggles to comply with the city's manners of politeness and small-talk. Each novel in the series has looked a little harder at Jansen, and Into the Fire delves the deepest yet, probing at the reasons he may have left Rotterdam so eagerly, years ago.

There is no order to the novels - it's possible to read them as standalones. They're all set at different times of the year. Into the Fire happens over the Halloween weekend; Under the Ice is set in the 12 days leading up to Christmas; The Scorched Earth during a summer heatwave. The fourth, out next April, takes place the week before Easter. Where Under the Ice is about change (new baby, new city), and The Scorched Earth is about the grief of loss (loss of a partner, loss of freedom), Into the Fire is about extremes, where literally most of the characters are prepared to burn everything down to get what they want!

Under the Ice is set in the huge St Albans park - complete with lake and Roman remains; The Scorched Earth in a village just outside of St Albans, in a Palladian church. The country house in this novel comes from my imagination, but the grounds sit adjacent to a real Roman theatre - it's actually the only Roman theatre in the UK. Much of the action takes place in this amphitheatre and the grounds of the house, as well as the house itself. I loved the idea of setting the action against the background of the ancient stage, beginning with a helicopter crashing down onto the Roman ruin.

Into the Fire by Rachael Blok is published by Head of Zeus on 1 April at £18.99.