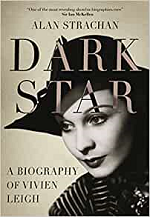 Dark Star: A Biography of Vivien Leigh by Alan Strachan (IB Tauris) has been awarded the Society for Theatre Research Theatre Book Prize, triumphing over a six-strong shortlist.

Theatre Book Prize Judge Panellist Professor Edith Hall, said: "It has been a joy and a privilege to read all the books submitted, and being prompted to remember heady days and evenings in live theatres has been a boon during a period of national lockdown where we have been so starved of live entertainment of any kind whatsoever."

Since 1998, the Society for Theatre Research has awarded the Theatre Book Prize annually to the best new book on any aspect of British or British-related theatre history and practice. The Prize is judged by an independent panel representing the theatrical profession, critics and academics. The 2020 judges are Edith Hall, Professor in the Classics Department of King’s College London, theatre producer Graham Cowley and Donald Hutera, dance critic for The Times. A full report of the Theatre Book Prize 2020 will be published on the STR website: www.str.org.uk

The prize was established in 1998 to mark the Society’s 50th anniversary. Previous winners have included Sir Antony Sher for Year of the Mad King: The King Lear Diaries, Nicholas Hytner for Balancing Acts, and Professor Steve Nicholson for The Censorship of British Drama 1900-1968.

This year's winner has been chosen from the other shortlisted books:
- The Art of the Artistic Director: Conversations with Leading Practitioners by Christopher Haydon (Methuen Drama)
- The Birth of Modern Theatre: Rivalry, Riots, and Romance in the Age of Garrick by Norman S. Poser (Routledge)
- An Illustrated History of British Theatre and Performance by Robert Leach (Routledge)
- Playwriting: Structure, Character, How and What to Write by Stephen Jeffreys and Dr Maeve McKeown (Nick Hern Books)
- Shakespeare Spelt Ruin: The Life of Frederick Balsir Chatterton, Drury Lane's Last Bankrupt by Robert Whelan (Jacob Tonson)