Rights delegates heard that Chinese publishers were focusing on quality rather than quantity, Ed Nawotka reports 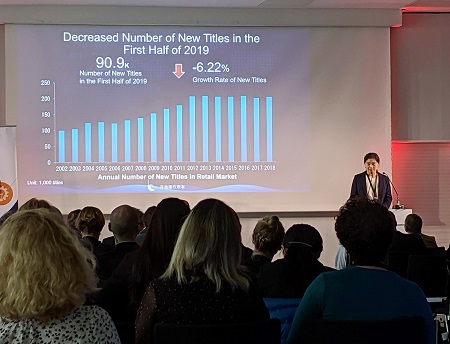 A trio of Chinese publishing executives confirmed what many have come to believe is the case: that Chinese publishers have actively turned inward and are deliberately slowing rights purchases. "The focus is less on acquiring more books, but on acquiring books of high quality," said Yanping Jiang, CEO of Beijing OpenBook, as part of the annual Frankfurt Rights Meeting, held on Tuesday afternoon. "An increasing number of these high quality titles are being produced by Chinese authors," she added.

That said, there remains a strong appetite for translated and foreign books in China, with some 13.5% of all books published there annually being sourced from abroad. Twenty-three per cent of sales by value and 20% of units sold are of books by foreign authors. "We estimate this market in foreign books to be worth approximately $3 billion," said Jiang.

China and its vast book market remains an aspiration for many Western publishers. The collected group of more than 100 rights directors, agents, and other publishing representatives were treated to a crash course in the market, which is valued at nearly $13 billion USD, according to OpenBook, with sales growth of some 11% in the last year. Perhaps unsurprisingly, audiobook sales have exploded, with sales up 42.9% over the past year; commensurate with this has been a 24% rise in online sales, and a nearly 12% decrease in sales in physical bookstores.

Jiang noted that children's book sales remained the strongest sector, and cited the success of author Yanf Hongying, who is the country's bestselling author and has sold some 160 million copies of her books, which help children deal with their feelings.

Following Jiang were Wuping Zhao, deputy chief editor and v-p of Shanghai Translation Publishing, who noted that there were some 16,000 translations published in China last year. "Many of them were titles from the public domain," he said, noting that since copyright protections in China last for 50 years after an author's death. "You will see many different translations of the same book, like The Little Prince [by Antoine de Saint-Exupéry] and books by Ernest Hemingway."

Among the most popular translated fiction titles in China were books by Japanese crime writer Keigo Higashino and Afghan-American author Khaled Hosseini.

Guangyu Liu, rights director of China Renmin University Press - which is one of China's largest, publishing 3,000 titles per year - emphasised that a strong sales track record was an important factor in helping a university press opting to pick up a title for translation. "Books that won't sell over 5,000 copies are not interesting to us," she said.