Friendship is the key

In an extract from The Family Business, his history of Ingram, Keel Hunt reveals how personal contacts enabled significant deals between the company and Hachette 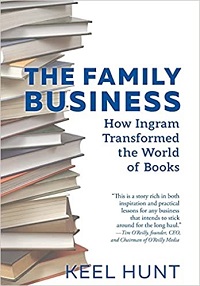 Ingram's growing network of international connections has opened up some important domestic opportunities. Perhaps the most significant example emerged from an acquaintance between two men - David Taylor, a Brit with the soul of a booklover and the charm of a born salesman, and Arnaud Nourry, a one-time consulting engineer who'd ended up heading the French company Hachette, one of the world's great publishers.

Taylor had begun his career in the book trade on the shop floor at Blackwell's, the famous bookstore in Oxford. During his 14 years with Blackwell's, he ended up running the company's global library supply business while also running his own internet-based sales business, working with clients that included George Soros's foundation. In 2003, Taylor was invited to join Lightning Source in the UK to help deepen and expand Ingram's reach into the British market. There, he worked with Suzanne Wilson-Higgins, the commercial director for Lightning Source UK, who had also worked previously for Blackwell's.

"The big challenge," Taylor recalls, "was that nobody in the book trade really understood what Lightning Source did. The marketing material at the time was very technical. I said to John Ingram, 'It's a brilliant product, a brilliant service, but for God's sake let's put it in language that the book trade uses rather than technical language.'"

Contacts
Taylor used his long list of contacts in the British publishing industry to energize Lightning Source UK's marketing efforts. He eventually became the company's managing director. It was a 2007 conversation between Taylor and his friend David Young, another experienced British publishing professional, that led to a connection between Ingram and Hachette. "I happened to be in New York," Taylor remembers, "and I called in to see David, who had recently started with Hachette in the United States." Young had previously toured Ingram's Lightning Source operation in Tennessee, and he'd been impressed by its innovation potential. Now the two friends hatched a further plan.

Young suggested that his boss, Arnaud Nourry, soon to become chairman of Hachette Livre, should come and visit Tennessee to see the Lightning Source operation. POD was almost unknown in the French market at that time. Arnaud happened to be coming to the United States, so we fixed up an Ingram plane to collect him for the visit. John Ingram had never met Arnaud, and he was excited to hear that he was going to come and visit Ingram.

Nourry didn't know very much about Ingram. "I was not exposed to the American market that much," Nourry remembers.

"I was very Europe-centric. I guess in the first one or two years after Hachette began investing in the United States, I learned that Ingram was a wholesaler for small accounts, libraries, and a few mass merchandisers, and also a print-on-demand provider. I knew who they were, but I did not have a lot of contact with them."

However, Nourry quickly realized the potential value of POD for Hachette: "We had an extremely long list of titles in France. A lot of them were not moving in any significant quantities on a yearly basis, and, as a result, many were going out of print. A print-on-demand facility could solve that problem for us."

Joint venture
The meeting between Nourry and Ingram led to plans for a joint venture between Ingram and Hachette that they would call Lightning Source France. It would include a new, state-of-the-art printing operation at Hachette's distribution facility outside Paris. "It took us a while to put together the joint venture," Nourry says.

"This was quite bold on John's part, because, for an American company of Ingram's size, investing in France was not entirely natural. I guess the size of Hachette and the personal relationship we had started building were the reasons why he considered our proposal a serious one. It took us a few months to incorporate the company. Then we started building the business from scratch, buying the machines and winning support from French publishers both inside and outside the Hachette group.

"It took about five years for the joint venture to break even, which was more or less what we had anticipated. It's been nicely profitable since. We've invested in new machines when needed. We're expanding, and we're doing extremely well."

Today, Lightning Source France has digital files for about 100,000 book titles, ships around a million units every year, and serves 15,000 retailers around the world. The prestigious partnerships the company has developed include an arrangement with the National Library of France whereby Lightning Source France works with retailers to market out-of-print books from the library's online collection, known as Gallica.

This new business operation in France has been a significant addition to Ingram's global portfolio. But even more important, the growing friendship between John Ingram and Nourry helped open the door for a lucrative US business opportunity for Ingram. It came about as a result of Hachette's ongoing effort to expand its publishing presence in the United States.

Another opportunity
The American publishing scene had been increasingly dominated by international conglomerates like Germany's Bertelsmann and Britain's HarperCollins. The French Hachette joined this trend. By the mid-2010s, Hachette had acquired such respected American publishers as Little, Brown and Warner Books (the latter now renamed Grand Central Publishing) and was publishing about 1,200 books in the United States annually.

As he scanned the horizon for additional acquisition opportunities, Nourry was attracted to one of the best independent publishers - the Perseus Book Group. Founded in 1996 by investor Frank Pearl, Perseus had grown into a $100 million publisher with such well-known imprints as Basic Books, Da Capo Press, Nation Books, and PublicAffairs. It was an especially interesting opportunity for Nourry because Hachette's US business was dominated by fiction and frontlist titles. By contrast, Perseus was best known for publishing serious non-fiction books with significant backlist sales potential.

Acquiring Perseus would help bring greater balance to Hachette's US portfolio.Nourry set about negotiating a deal with David Steinberger, the president and publisher of Perseus, and the company's owners, an investment firm called Centre Lane Partners. A tentative agreement reached in 2014 fell apart. But two years later, the two companies returned to the bargaining table, and this time they succeeded.

The deal they negotiated was inevitably a complex one. Perseus was really two companies. In addition to its publishing arm, Perseus owned a big book distribution business, which included the well-known company Publishers Group West. Serving some 600 small publishers, this distribution business generated about $300 million in annual revenue for Perseus. It was a large, profitable business - but not one that Hachette was interested in. They were busy enough developing a distribution operation to serve their growing US publishing operations; taking on distribution for thousands of additional titles every year would have overwhelmed them.

Fortunately, Nourry had a solution: "It took me all of 30 seconds after I finished my negotiations with David Steinberger to call John Ingram."

Perseus's distribution business may not have been attractive for Hachette, but it was a perfect fit for Ingram. Back in 2004, Ingram had jumped into the distribution business through its launch of Ingram Publisher Services (IPS). Since then, IPS had expanded steadily but slowly, building a portfolio of about 100 publisher clients. Taking on the Perseus distribution clients would bring a massive jolt of growth. It would have taken decades for IPS to attract 600 new publisher clients one at a time; now they would join the fold in one fell swoop.

Then began a lengthy, complicated job of making the handover work. "I can tell you that separating the various parts of an existing business is a very complex undertaking," Nourry says. "You have to duplicate the IT, the infrastructure, I mean everything. It takes a lot of professionalism, trust, and even friendship to be able to work it all out." This instant expansion of Ingram's distribution business had a major impact on the overall strategic shape of the organization. In John Ingram's words, "The centre of gravity for Ingram Content Group shifted from wholesale to publisher services with the Perseus acquisition."

For Ingram's bottom line, the shift to publisher services has been a significant advance. A simple graph presented at an Ingram board meeting in 2017 told the tale. It demonstrated how Ingram Content Group had grown its profits dramatically over the most recent 25 years, with a growing share coming from Ingram's broadening of its publisher services segment. The title of the graph probably said it best: Innovation Drives the Business.

Excerpted from The Family Business, copyright 2021 by Keel Hunt. Used with permission of the author and the publisher, West Margin Press (westmarginpress.com).