Getting published: what I learned from my 80-year-old pet

As his debut children's picturebook launches, author Ian Brown on getting published, 30 years writing and producing for TV - and what it's like working with a tortoise 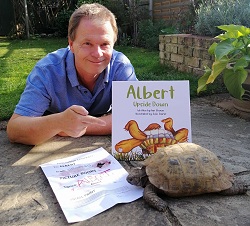 You wait decades to land a book publishing deal - and then four come along at once. Yes, I know.  But I can crow a bit. Can't I? It's taken what feels like for ever to secure a deal, and now publication day for the paperback of the first Albert the Tortoise picturebook is here.

The launch of Albert Upside Down is the start of a four-book series agreed, so far, with Welsh indie publishers Graffeg. The animated ebook and other ebook versions launched a few weeks ago. It's a dream come true for me and illustrator Eoin Clarke.

All that while I was trying to get published. Novels, comedy books, other children's stories. All fell on stony ground with countless agents and publishers as I worked on them in between TV commitments.

Although Eoin has illustrated before, in recent times he's mainly worked in animation. He's storyboarded for Ray Harryhausen, and is part of the team behind animated pieces for CBBC's Operation Ouch and opening titles for Mortimer and Whitehouse: Gone Fishing. Over a 30-year career he's won 30 awards. 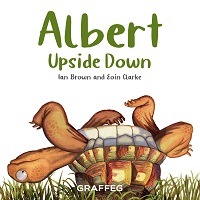 Entering the world of books is a thrill for both of us. It's a very different world. But possibly not such a different process. When I write for TV, be it for an entertainment show, a feature documentary script or gags for a panel show, I picture the scene, the reaction, that moment on screen. For Albert Upside Down, aimed at children aged 3+, it was a case of imagining the illustrated pages and how they might look around the words. How they would catch the eye, engage with children - and adults that might be reading aloud to youngsters. Of course, Eoin and Graffeg then improved on all that massively.

It's been a joy working with Graffeg. Both Eoin and I have found television challenging in recent years. Presenting your material to ever larger committees of decision makers is not a very rewarding process. I always say, when it comes to writing for television, that I make changes more than I write.

Then, as producer, there is the headache of health and safety. Important, I know, but on some shoots, long before Covid, a massive commitment. Fortunately, real Albert the Tortoise, the inspiration for these stories, comes with his own protective shell.

Having spotted their work on other picturebooks, I targeted Graffeg. It took a while, but, once on board, Eoin and I were pretty much free to get on with it. Of course, page layout had to be designed and a font selected, and the small team at Graffeg were great at that.

Our first experience in picturebooks was also a learning curve. Page size, technical terms, acronyms in the publishing schedule had to be explained.

How we met
I met Eoin about 10 years ago, when I was touting round an idea for a comedy animation called The Bruvs - not for young children. Eoin was put forward as a possible character designer and animation director. He presented his images of The Bruvs - East End criminal brothers trying to mend their ways - and they were spot on immediately.

When I had the idea for the first Albert book, I turned to Eoin to illustrate. While we do certain things as a team to make The Bruvs happen, Eoin animates alone. In the same way, we discuss the books, then Eoin works on the illustrations separately. I don't know how others do it, but I almost see the whole books in one go. We wanted a retro feel to the artwork with lots going on for children to spot. Eoin brings all that to life.

The stories are based in part on actual incidents with the real Albert the tortoise. He was rescued by my wife 50 years ago, when she was a little girl. Real Albert could be 80 years old. He does, now and then, find himself upside down.

Tweeting tortoise
Publicity is one area of difference from TV. For most TV shows, the production company, broadcaster or famous names involved will handle publicity. Now, I and the octogenarian reptile have had to step up, embracing social media and the digi-tort age. Albert has a Twitter account, a Facebook page and his own website. He's not flared up yet, but it could all go to a tortoise's head.

Early response to the first book, Albert Upside Down, has been positive. Book two, Albert and the Wind, follows in October 2021, with books three and four in April and October 2022.

Dare I say all the excitement over Albert Upside Down is tort-ally thrilling - and something Eoin and I will certainly be shell-ebrating.

I even got to do silly voices for the narration of the animated ebook - Graffeg's first venture into animated books. A natural development for Eoin.

After decades of trying to get published, we're delighted. As well as more Albert, we have other books lined up to offer. Tortoises are in many ways the champions of perseverance - steady and sure. That's one lesson real Albert passed on. Keep on trying, the tortoise taught us.