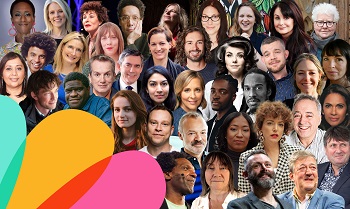 Hay Festival has announced the cast lists for this year's two gala events, Hay Festival Opening Gala - A Night of Hope (26 May) and From Women to the World Gala (5 June). The events are part of the festival's free digital programme for its 34th spring edition.

Heather Salisbury, Hay Festival artist manager, said: "This spring we beam our programme to you from Richard Booth's Bookshop in the heart of Hay-on-Wye, welcoming writers, readers, thinkers and dreamers together from around the world to join our digital party. Let's meet this moment of challenge with hope."