As the 70th Cheltenham Literature Festival opens, Nicola Tuxworth introduces the longest-running event of its kind in the world 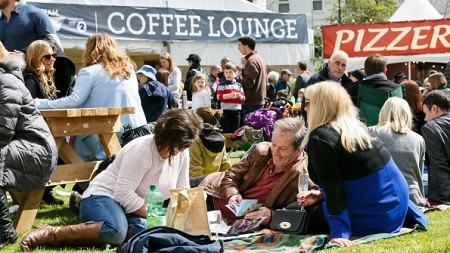 The Times & Sunday Times Cheltenham Literature Festival is 70 this year - the longest running literature festival in the world, and the first ever. In this small but perfectly formed town in the heart of the rolling Cotswold countryside, the council's spa and entertainments manager GAM Wilkinson set up an event that has been a model for festivals all over the world, to the enormous benefit and joy of readers and writers everywhere.

In 1949, Cheltenham staged events over five days in early October, including addresses by authors Emma Smith and Compton Mackenzie, scriptwriter and novelist Nigel Balchin, and historian Arthur Bryant. The final event, "Hurrah for Books!", was a specially commissioned performance by Joyce Grenfell and Stephen Potter, and we are recognising it this year with favourite monologues and extracts from Grenfell's 1949 performance read by actress Maureen Lipman.

Over the next 70 years the festival went on to welcome stars from Doris Lessing and Tom Stoppard to JK Rowling, Toni Morrison and Hilary Clinton - according to some very rough back-of-the-envelope calculations, there have been about 20,000 speakers, well over 10,000 events, and about 700 days of literary festivities - entertaining, of course, countless audience members young and old from all over the world. From a handful of events in the ornate Cheltenham Town Hall, the festival has grown into a lively tented village in beautiful Montpellier Gardens, thronging with excited crowds and famous literary faces, but always with quiet spots to sit and read.

In 2019, we wanted to celebrate our incredible heritage and ensure this year's programme reflected the massive cultural and social changes across the country over the past seven decades, while looking forward and challenging ourselves to be more relevant, more diverse and more innovative as we contemplate the future of the written word. And so our "7 At 70" project came into being. Seven extraordinary guest curators - Max Porter, Yomi Adegoke & Elizabeth Uviebinené, Dominic Sandbrook, Tessa Hadley, Robin Stevens, Anthony Anaxagorou and Leslie Vinjamuri - have helped shape our anniversary programme, including events discussing seven decades of British history and seven critics debating the seven most important novels since 1949.

There will be seven "Celebrate with..." events with high-profile authors reflecting on their break-out books: Howard Jacobson, Robert Harris, Jessie Burton, Herman Koch, Tracy Chevalier, Alexander McCall Smith and Jung Chang. As well as looking back, we look forward to welcoming the stars of the future and showcasing exciting new talents - among them Jessica Andrews, Ronan Hession and Season Butler - at our Fiction at 7, Debuts & Cocktails and Proof Party events.

We will also celebrate our collaborative literary relationships around the world, with seven key international festivals each nominating a rising star from its programme to join us, as well as 70 global festivals recommending one must-read book for a "Read the World" reading list, with titles including House of Lords and Commons by Ishion Hutchinson (nominated by Calabash International Literary Festival, Jamaica) and Storm Birds by Einar Kárason (Reykjavík International Festival, Iceland).

It's impossible to narrow down the highlights. I love the sense of achievement on the first morning of the festival, when the site is ready and the events are about to start, with all the right books in place, the first lot of writers being picked up from the train station, and the first among our 9,000 schoolchildren visitors arriving on coaches - a future generation of readers, writer and thinkers to be inspired. This year will be my seventh one as head of programming - another seven at 70 - and I know from experience that over the 10 days we can experience all sorts of issues, from storms to train strikes, huge controversies on stage, and those magical moments that happen when speakers on stage interact with a live audience.