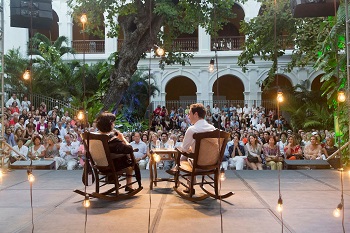 Physical events will take place in Jericho (22-24 January), Medellín (25-27 January) and Cartagena (28-31 January), organised 'with careful respect for the measures implemented for cultural events as a result of the pandemic, while the digital programme will be free to view online at hayfestival.org/cartagena'

This is the first Hay Festival event of 2021, kicking off a global calendar of editions that also encompasses Mexico, Peru, Spain, the US and the UK.

Since its first year in 2006, Hay Festival Cartagena has welcomed more than half a million book lovers to the Festival over the years. Attracting more than 50,000 people annually, the Columbian event enjoys wider cultural impact across Latin America thanks to regional media partnerships with RCN TV and Radio, El País, El Tiempo, Arcadia and an international collaboration with BBC Mundo.

Cristina Fuentes La Roche, international director of Hay Festival, said: "Hay Festival begins the new year with a diverse and inspiring programme, inviting leading voices from across the world to meet this moment of crisis with their new ideas and visions for tomorrow. Our digital programme will be an inspiration to Hay Festival Cartagena’s widest audience yet. Join us live or online to reimagine the world and begin 2021 with a renewed sense of hope and vision."