In this new age of page-to-screen adaptations, the rightsholder is king 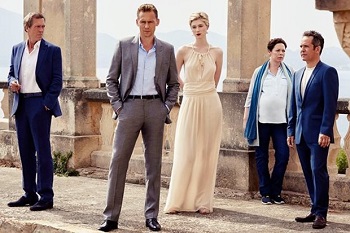 The love affair between the silver screen and the written word is almost as old as cinema itself. It begin with the very first silent films, grew during the Golden Age of Hollywood birthing classics such as It’s A Wonderful Life, Double Indemnity and The Wizard of Oz, before morphing into a love-triangle between the page, the big screen and the (recently invented) television screen.

And now that relationship has changed again. The arrival of Netflix, Amazon and other subscription video on demand services has given literary rightsholders a new set of suitors. Earlier this year it was reported that Netflix is currently working on at least 50 literary adaptations and more recently Sony and HarperCollins announced an "unprecedented partnership" to source literary material and develop it into content for all platforms.

This increased demand for literary properties is hardly surprising given that books, short stories and comics not only offer a fully developed narrative and a proven audience, but also a greater chance of commercial and critical success.

Research from the UK Publishers Association [https://www.publishers.org.uk/news/releases/2018/creative-industries-report/] shows that film adaptations of books gross 44% more at the UK box office and 53% globally and high-end TV adaptations attract 58% more viewers and higher ratings. Yet with so many producers, platforms and studios hungry for good content, demand is starting to outstrip supply. In this new world, the rightsholder is king.

This is good news for authors, agents and publishers alike. The competition for content is driving up the value of film and TV rights and creating opportunities for texts and genres that may have previously been overlooked. Producers are exploring publishers’ backlists and literary estates’ catalogues for interesting properties, such as those which suit new formats, speak to diverse audiences or address current issues and trends, as well as shifting through the wealth of self-published material available online.

This increased interest in self-published and other user-generated stories such as fanfiction is also creating new ways of discovering content and a new breed of intermediary. For example Wattpad Studios, the entertainment division of online self-publishing platform Wattpad, effectively acts a digital agent by using its 'Story DNA' machine learning technology to identify promising stories for adaptation (based on audience data and the linguistic make-up of stories) and which it then connects with producers, platforms and studios across the globe. Wattpad has a number of first look deals this year, including with Sony Pictures Television, Hong Kong-based streaming service Viu, and French producer Lagardère Studios, and its recent success include Emmy nominated Light As A Feather and Netflix hit The Kissing Booth.

There are also fresh opportunities for books that were previously deemed "unadaptable." Gabriel García Márquez famously refused to sell the film rights to One Hundred Years of Solitude during his lifetime as he felt his magical realist family saga which spans a century couldn’t be reduced to a 120-minute feature film and wouldn’t translate well into English.

Yet with higher budgets and fewer constraints on form, length or language, the series format now offers the time and space for complex, sprawling narratives to unfold and the opportunity for more non-English language productions to be made. Marquez’s estate has been persuaded by these developments and granted Netflix the rights to produce a Spanish-language adaptation of One Hundred Years of Solitude earlier this year, joining a roster of upcoming "unadaptable" adaptations including Neil Gaiman’s comic book series The Sandman and Mervyn Peake's Gormenghast Trilogy.

Page-to-screen adaptations also bring benefits to rightsholders that outlast the initial rights deal. Having sold (or even just optioned) the film & TV rights in a book stokes up interest in the property and can play a decisive factor when striking foreign and other ancillary rights deals. If the adaptation is produced and released, this indirect boost to sales is then coupled with a direct boost from tie-in editions, scriptbooks and making of books.

For example, the UK Publishers Association’s research calculates that the 2017 film adaptation of Daphne du Maurier’s My Cousin Rachel increased sales of all editions of the novel to such an extent that sales in 2017 alone accounted for 23% of all sales since 1992 (both in terms of copies and of revenue). Both the 2016 TV adaptation of John Le Carré’s The Night Manager and the 2017 adaptation of Louise Doherty’s Apple Tree Yard tell a similar tale, with a large spike in sales across both tie-in and standard editions following the series airing.

Publishers are also set to benefit as more and more licensors of properties that originated on screen look to extend their content and brands across a range of media, including book publishing and merchandising.

Whilst we don’t expect the demand for literary source material to cease anytime soon, we may see the terms of this very long love affair change again as new entrants – such as Apple, Disney and Facebook – disrupt the market again.