Published, accessible, authentic: how audiobooks can be inclusive 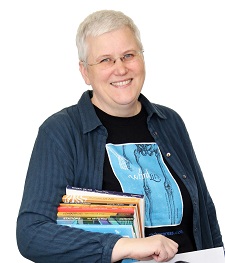 As a small, independent publisher, I am constantly aware of our audience and our potential audience, because we were not going to find them browsing the 3 for 2 piles. The relationship between the content and the audience was at the forefront of our publishing strategy in the early days ("What do 'they' want to read?" and "How am I going to tell 'them' we are here?"). All the stuff you get told at conferences. Useful, but generic.

Then delivery ("How do 'they' want to read?") came to the fore. Our physical books are all minimum 12pt font to make them as readable as possible without getting into actual large print, but ebooks were an inevitable step, enabling readers to control print size and with the potential for the text to be read aloud by machine.

We have always published disabled and LGBT authors: they are my tribe, I know where they are, I know how to reach them; but I wanted to do more, and I realised a bit of the jigsaw was missing. Whom do "they" want to read? And of course I know the answer - it's why I started writing in the first place, because I couldn't see me reflected in the books I read.

As a one woman band, I can't reflect every community I want to publish, and I am aware that this is an issue for writers: they need to feel comfortable with their publisher, they need to recognise themselves in their publisher's staff, but most importantly, in the other writers. And we do publish a diverse range of people from all over the world, and a wide range of communities, but there wasn't what you could call a strategy to it.

"I realised that I didn't mean diversity, and started saying inclusivity"

We use accessible venues for our events, and the first time we ran the Solstice Shorts Festival we had British Sign Language (BSL) interpreters, partly because we have a significant local Deaf community, partly because I have a personal interest in BSL. Interpreters are the most expensive element of the festival, so we can only do that with funding, and Arts Council England (ACE) has been very helpful. But! These were mainly stories and poems written by hearing people, interpreted for the Deaf. I was aware of a disjoin there that made me uncomfortable.

We love to do live readings, often with actors, and we video the output to make it accessible to more people. Our website is stuffed with recordings, but of course readers don't necessarily know they are there, whereas increasingly audiobooks are signposted - people know where to find them.

We met Listening Books at the London Book Fair several years ago. They are a charity that provides an audiobook lending service for those who can't read, regardless of why. Importantly, they have their own studios. Working with them for the first time helped me realise that audio is about far more than visual acuity, and reaches a largely unrecognised audience.

Audiobook production is expensive, and our resources were insufficient. We experimented with the shortest book we had, The Don't Touch Garden by Kate Foley (who read it herself, beautifully), so that we would know what we were talking about when we eventually applied for funding. But three disappointing attempts at partnerships/funding left the plans on a backburner.

Then a significant anniversary combined with Covid meant a moment for reflection and strategising, and a determined attempt at some audacious funding applications (thanks again to ACE).

The funding is for nine physical and audiobooks, including anthologies targeting minority writers whom we were not yet representing strongly enough, with guest editors from those communities; and for the anthology by Deaf writers, a BSL version to replace the audio.

What was on my mind was the Deaf clients I had worked with as part of a business mentoring project with a large charity, and how their stories, told in BSL, were brilliant and vibrant and thrilling. I wanted to get that on the page. There is an argument that Deafness is not so much a disability as a language barrier, which could be solved if the hearing just knuckled down and learnt BSL, so it was important that all the stories and poems be available in BSL too - Deaf stories and poems by Deaf people, performed by Deaf people.

While interviewing for staff, candidates kept telling me that it was Arachne's diversity agenda that drew them to us, and at some point, I realised that I didn't mean diversity, and started saying inclusivity.
Diversity has a feel of "different from me", and is defined by the person using the word, Inclusivity is making people welcome, whoever they are, and that is what I'm trying to do.

We collected a cast of eight actors with home studios to cover all the short stories in three collections. An ability with accents was one thing, but I wanted authentic voices for the Black and Asian stories, and we managed to find a trans actor for a specific role, who took on all sorts of other parts, including a talking building. We've just cast a brilliant gay actor to voice Jeremy Dixon's forthcoming poetry collection A Voice Coming from Then, which has some sensitive and painful material in it that needed someone who would know the background.

Not every voice is exactly who is depicted in the story or poem. That would take a cast of thousands - I don't know any talking buildings who are in Equity. And there are definitely challenges in directing and editing remotely for actors recording from their airing cupboards, but hopefully we'll be back in the studio soon.

So here's the theory - it's not perfect yet, and it hasn't been tested, and I'm getting my head round how I might reach and work with blind writers, but it seems obvious, now.