Emma House presents the latest in her series of interviews with members of the PublisHer community, an industry-led push for progress on gender equality in publishing around the world 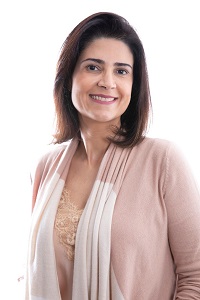 Karine Pansa is the owner and publishing director at Girassol Brasil Edições, a children's book publisher in São Paulo, Brazil. She is also a board director for the Brazilian Book Chamber (CBL) and a member of the executive committee of the International Publishers Association (IPA). Until recently she was on the board of the National Book and Reading Plan (PNLL), a set of programmes in the book industry promoting reading habits, literature and developing libraries in Brazil, and is currently chair of the board of directors at the Dorina Nowill Foundation for the Blind, facilitating the inclusion of blind and low vision children, youth and adults through free and specialised rehabilitation services, special education, low vision clinic and employability programmes.

How did you get into the publishing industry and what attracted you to publishing?
I was kind of "born" in the publishing industry. Since I was very young my dad worked at one of the major publishing houses in Brazil, so I grew up attending book fairs and book festivals. I remember when I was 15 and I wanted to do something for my summer vacation and earn my own money, my father offered me a book (a children's atlas) to be translated from English to Portuguese. I really enjoyed the work and asked for more jobs. When I was 16, I visited the Frankfurt Book Fair for the first time - it feels like a very long time ago! I went on to university to study business administration, started working as a trainee at the publishing company my father worked at, and stayed there for seven years. I and my father were invited by a Spanish company to set up Girassol Brasil Edições, which is the publishing company I now own and run; I'm proud to say we have been in business for 20 years. During my career I've also studied for an MBA in publishing here in Brazil, and taken part in the Yale summer school for publishing.

I also think that personal learning, self-development and having new experiences are big motivations. I am curious to understand new ideas, different perspectives and new realities. By dedicating myself and my time in some way, these experiences allow me to both contribute and to learn. This is really exciting for me. Moves me!

I was only the second woman to be president of the Brazilian Chamber of Publishers. I had worked closely with Rosely Boschinim, who was the first female president, on a great project called Minha Biblioteca (My Own Library), instigated by the mayor of São Paulo to give a book to every child in the city. I continued working with her in her second term as president and became increasingly involved in the association. At the end of her terms she encouraged me to stand for election as the next president, and fortunately I was elected.

I think with all these things - improving diversity, improving the industry and the market environment - that if you want to see change, you need to be the change. If I see something that needs doing, I want to pitch in and make it happen. You need to put yourself out there - and enjoy it along the way!

What do you hope to contribute in your position as an IPA Executive Committee member?
In my role as president of the CBL I was introduced to the IPA and to YS Chi, who was president at the time. He was keen to improve the diversity of the executive committee of the IPA, and again encouraged me to stand for election - and again I was fortunate to be successful. Now, representing the Latin American publishing market is an honour for me. I'm confident of the power of diversity and the results of collaborative work. As part of IPA's executive committee, I trust that I can contribute to embracing the challenges of the global publishing market and work together towards to its development, not only in the field of diversity and inclusion itself but the development of the global publishing market overall.

What challenges have you faced in your 27-year career in the publishing sector?
I believe challenges are part of our day-to-day work. Sometimes you have financial problems, other times you have organisational ones. During my time as president of the CBL I've had various difficult times with projects and initiatives where I had to look through the situation and consider both sides before making decisions. The financial situation of our economy is continually presenting challenges which I've had to face both as a publisher and in my role with the chamber - daily, it's never easy. Fortunately I've never faced challenges because of my gender. Having a voice as a woman has never been a challenge or motivation for me in the same way I know it has been for other women in other countries and cultures.

What have been your proudest moments of your career?
By the time I was elected president of the CBL we had committed to a series of "Guest of Honour" programmes in various book fairs around the world. Actively participating in the Brazilian Guest of Honour programmes in book fairs (Frankfurt, Bogotá, Bologna and Paris) has been some of the proudest moments of my career. But making books for children as a career and surviving as a company in these difficult economic conditions - that's what I am most proud of.

Who has inspired you in your publishing career?
My Dad played a very important role in my career, actively encouraging me from an early age to believe in myself and inspiring me in the publishing industry. He showed me the importance of books in the education of children. It makes me believe that the world can be better with my collaboration.

What is the environment like for women in publishing in Brazil? Are there any programmes for supporting women in publishing?
The Brazilian publishing industry has historically been a market that has always had women in various positions. Publishing is seen as a career for women, but not necessarily in leadership positions, which is a common theme I am hearing from my colleagues round the world. There are a couple of women who have made it to the top, but it's not very common.

I was only the second woman to occupy the presidency of the CBL in 70 years. It is very unfortunate to realise that there is still a lack of balance in leadership positions.

What do you think of the PublisHer network and what do you think it can achieve?
PublisHer is an amazing initiative that will hopefully encourage women in publishing to aspire to another level. Women face diversity and inclusivity challenges in their lives, and I believe PublisHer will help to improve the situation at a global level. There are new initiatives from PublisHer such as a mentoring programme, guidelines and networking opportunities which I believe will make a difference. As a network we are supporting and encouraging each other to step forward to take up positions of leadership, both in our own countries but also internationally - for example on the FEP and IPA executive committees.