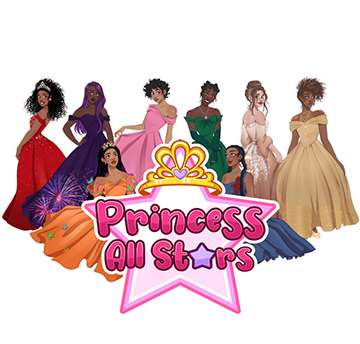 Stacy Ramsey, author and founder of Mallidy Publishing, has launched a Kickstarter to create her new picture book series, Princess All-Stars. The collection of books stars eight ethnically diverse princesses, each one with a different complexion, hair type, and kingdom of her own. The picture book series is targeted at 3-8 year olds, and after its launch the books will be rewritten and republished as chapter books for older readers aged eight and over.

Princess All-Stars was created when Ramsey noticed that although her daughter loved princesses, there were no options that looked like her, pointing out that 'although non-ethnic princesses are wealthy, royalty even, in charge of huge suburban kingdoms, the same has never been said for an ethnic princess, who at best may be the princess of a tribe, but never a traditional princess like her non-ethnic counterparts'.

The series was launched on Kickstarter on 17 March 2021, aiming to fund the first two books in the series. After the campaign reached its goal five days after its launch, it is still accepting pledges here for future books in the series. Those pledging can sign up for rewards including copies of the books, puzzles, story book planners, colouring books, and framed prints.

Ramsey said: "I wanted to ensure all little girls had the option to emulate a princess that looked familiar to them, I truly believe all little girls deserve a princess that looks like the girl in the mirror and that is what I hope I've achieved with The Princess All-Stars." She is also known for the Mally & Boom Boom series, following a brother and sister duo who use their imaginations to make everyday situations more enchanting and fun.