My life in publishing - the bags that tell the story 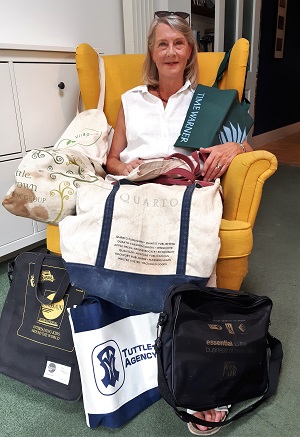 I had a hunch when I went back into the Hachette office on 16 March that this might be my last day. I was due to retire on 7 May, and I couldn't see the office closure ending quickly. So I cleared my desk, emptied my drawers of the personal stuff accumulated after 15 years, took a final photo from the 6th floor roof terrace, and slipped out of Carmelite House for the last time.

As I shared a crowded Tube home with City businessfolk clutching computer monitors and keyboards, I looked down at my feet, where my entire working life was stuffed into two canvas bags. It seemed an apt way to mark the moment. These bags document a life in publishing through the logos of imprints and events past and present.

When I started out in publishing, tote bags were not 'a thing'. As an aspiring publishing professional, I carried a briefcase: one that opened with two satisfying clicks of the locks to reveal sandwiches and a manuscript. I progressed in rights, so graduated to an enormous airline pilot case to carry dummies and artwork to Bologna or Frankfurt, and a Samsonite case with a sturdy plastic shell. I splashed out on a maroon leather satchel from the craft market outside Frankfurt's Halle 5 to look less corporate. The leather briefcase with wheels that I treated myself to on joining Little, Brown has scarcely been used, partly because it is so heavy, but partly because we are now surrounded by light, practical and beautifully designed cotton bags that can carry everything we need.

I recall seeing them first in the US, at ABA (now BookExpo): the first time I had seen publishers pushing proofs, badges and other freebies into the hands of the public, and promoting their companies with branded tote bags. They gradually caught on in the UK and, as the war against plastic took off, they became the giveaway of choice to herald new title launches, publishing anniversaries and events such as World Book Day.

So here are my Desert Island Bags - the ones I wouldn't be without, chosen for practicality, longevity and the memories they evoke:

Time Warner Books - a smart green and turquoise number dating from a specific moment in 2006 just before Little, Brown was taken under the wing of Hachette
MILIA Cannes 1999 - a sturdy canvas job from an ill-advised expo in early days of the digital revolution where we were looking for synergy between illustrated books and CD ROMs – what a cul-de-sac that was. Also easily dated by the advert for Power Rangers
London Book Fair - not easy to date, but a practical woven nylon bag – I still use this to carry props and papers for our Selling Rights training course
Tuttle Mori 1998 - the agency's 50th anniversary, but the London party at which these were distributed was also a wake for founder Tom Mori who had just died. (This one has a plastic interior and has served the family as a swimming kit bag for decades)
Quarto 1996 - my short stint at this company was not a happy one, but I did come away with two Brooks Brothers' style canvas bags which have carried our weekly shop ever since. Thank you, Quarto
Publishers' Training Centre - fond memories of learning and teaching in inaccessible downtown Wandsworth. A light cotton bag ideal for scrunching up in a handbag for unexpected purchases
Virago/Abacus 40th Anniversary 2013 - double-bubble!
Little, Brown - green swirly logo. A canvas tote with a zip. Take note all marketing colleagues!
and the one that got away: Fleet - the imprint launch bag with a beautiful hare logo. How did I miss out on that one?

My good friend and ace literary agent, the late Carole Blake, was burgled a few years ago. She lost, among other things, her 'cellar' of rather good Champagne - 'and the bastards took all my publishing carrier bags to carry the bottles in!' I felt her pain. It's been hard to bid farewell to a publishing career, but at least I have the bags to remember it by.