My marathon run for BTBS

A remark at the Book Trade Charity Christmas party led Toby Faber to run 26 miles in 23-degree heat. He reports on how he did it 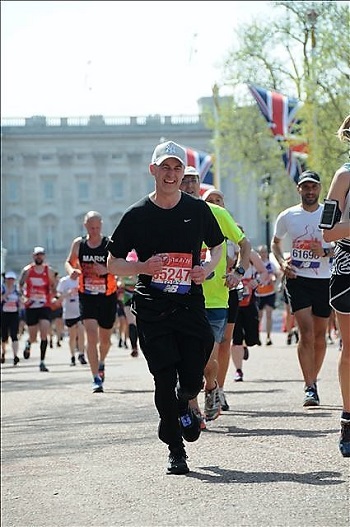 In retrospect, dressing head-to-toe in black for the hottest London marathon on record may not have been the most sensible tactic, but I was so full of warnings about the possibility of new clothes rubbing that I'd decided to run in the kit in which I'd been training all winter. And it was hot - brutally hot at times - but at least I had no problem with chafing.

It had all started at the Book Trade Charity (BTBS) Christmas drinks party last December. Somewhere between meeting old friends and watching a video about the great work done by BTBS, I registered a casual mention in a speech that there were still a couple of places among the charity's London Marathon allocation. It set me thinking. I've run a couple of times a week for the last 10 years, so I had some basic level of fitness; and London Marathon tickets are like hens' teeth. Within a few days I was signed up to run my first ever marathon, at the age of 52.

Nicki Cattle at BTBS had warned me that some people find the fundraising target to be a challenge. Luckily the people I know in the book business, plus enough friends outside the trade, were sufficiently confident that I wasn't going to be running another marathon any time soon to be generous in response to this one.

Meanwhile I was training. Running three or four times a week, including a progressively longer run every Sunday, takes some scheduling, but I found myself enjoying it, even appreciating the need for the pre-dawn runs in January. That long run provided an opportunity to explore parts of London I had never seen before. A neighbour suggested the canals as somewhere relatively flat for training; I went to Hackney Marshes and the Limehouse Basin, to Victoria Park and odd bits of industrial wasteland beyond Willesden Junction. I got fitter.

So it was all a breeze, right? Well, as my opening paragraph may have hinted: no. The heat made the marathon itself an exercise in endurance. The crowds were amazing, lining every yard of the route, offering slices of orange and banana, jelly babies and "vegan snacks" that really did keep me going. There was a miraculous moment at around mile 24 when my wife and daughter spotted me, and made me hear them, even though we had failed to make proper arrangements. The training all paid off, in that I managed to run the whole route. It was, however, much harder than I had been expecting. There were times when I came close to giving up, but realised, in the old cliché, that I couldn't: all those people had sponsored me!

Now, a day later, I'm having to hobble down stairs one at a time; there's a pain in my right foot that is a clear indication of some biomechanical fault in my running technique. But I've not only ticked off a major "to do" on my bucket list, I feel on top of the world. I've run a marathon! If you get the chance, do it.

Toby Faber ran the London Marathon for the Book Trade Charity. You can still sponsor him, here.

Toby Faber's first novel, Close to the Edge, is to be published by Muswell Press in April 2019. He was managing director of Faber and Faber from 1997 to 2001, and remains on the Faber board. He is also a director of Liverpool University Press and the Copyright Licensing Agency. His two non-fiction books were published by Macmillan.
Share on Facebook
Share on Twitter
Download PDF