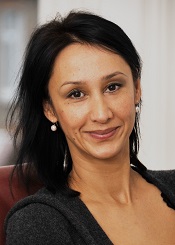 Ailah Ahmed, publishing director, secured UK&C rights for Love Marriage from Jonny Geller at Curtis Brown in what is described as a 'heated' five-way auction. Virago will publish Love Marriage in Spring 2022 and Nan Graham at Scribner will publish the book in the US. A parallel auction is underway for the TV rights.

According to the acquisition statement: 'In Love Marriage, Yasmin and Joe, both doctors working in the same hospital, are about to get married. Joe is the son of a famous feminist writer and icon, Harriet Sangster, while Yasmin is the daughter of a south London GP. In the opening scenes the two families meet for the first time.

'This meeting leads to the unravelling of long-held secrets, lies and betrayals, ultimately causing Yasmin to question her own parents’ marriage, which was a love match made against the odds. She begins to re-evaluate what a so-called love marriage actually is or can be, and how she might find her way into one of her own. Meanwhile, Harriet, the public intellectual, is blind not only to her son’s private emotional troubles but also to her own. She forms an unlikely friendship with Anisah, Yasmin’s mother, fuelling family tensions which are strained to breaking point.

'Love Marriage is a brilliant novel about who we are and how we love in today’s Britain. An exploration of the psychology of relationships, it brings together flawed characters stitched together by (largely) good intentions into a rich tapestry, frayed by misunderstandings and secrets. What starts as a striking social comedy develops into a heart-breaking and gripping story of two cultures, two families and two people trying to understand one another.'

Ahmed said: "In Love Marriage Monica Ali has constructed the most irresistible characters. I am obsessed with each and every one of them. Their chemistry is undeniable, and their valiant attempts to do the right thing in the face of their own contradictions and flaws, their terrible secrets and betrayals, is so tender and human. She has mastered the depiction of tricky negotiations in relationships, careers and family. I am delighted to work with Monica whose novels always tell us something vital about our culture and ourselves as readers."

Ali (pictured) said: "I am thrilled that Love Marriage has found a home at Virago, an imprint that has published so many authors I admire and that has such an incredible history of championing women’s voices from all backgrounds. The whole team has responded to the characters with such warmth and enthusiasm that I know the book will be in excellent hands. And I’m excited about working with Ailah, who has already proved to be an incisive and gimlet-eyed editor." Ali's Booker-shortlisted Brick Lane, which came out 16 years ago, is published by Black Swan.