Olive - the inspirations and challenges behind Emma Gannon's debut novel

'I have realised that books aren't just a bit of fun entertainment and escapism, but an actual life raft' 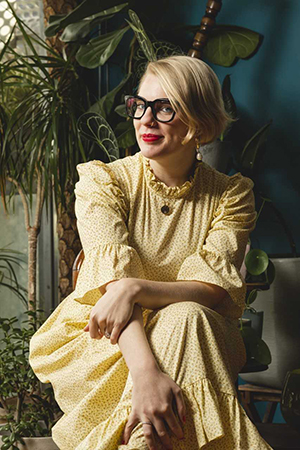 Bestselling author Emma Gannon, known for non-fiction titles including The Multi-Hyphen Method, is releasing her debut novel Olive with HarperCollins on 23 July 2020. A book about a protagonist who's asking big questions about motherhood, it has been described as 'insightful, brilliantly observed and honest' by Sophie Kinsella, and 'thoughtful, searching, funny, and (most importantly) honest' by Elizabeth Gilbert. Gannon is also known for her podcast Ctrl, Alt, Delete, and her writing for publications including Guardian, Elle, and The Sunday Times. Here she discusses her inspirations, her writing challenges, and how Covid-19 changed her publication plans.

What inspired you to write Olive?
A collection of things! I really wanted to read a book about a child-free-by-choice protagonist and then I thought: maybe I could write one! A few of my close female friends recently had babies and it was amazing and exciting watching how their lives changed, and it also made me question my own future. I had also listened to an interview with Terry Gross (host of Fresh Air) about knowing from a young age that she probably wouldn't choose to have children, and it was the first time I'd heard a woman openly saying how much she loved her child-free life. I also kept reading articles and stats that said millennial women were thinking about motherhood differently - so I put out a tweet asking child-free-by-choice women to contact me and my inbox basically broke. I had so much material, and then Olive was born.

You have already released two successful non-fiction titles. How did the process of writing a novel feel different?
It definitely felt like a new challenge. It felt harder because it was so new. A different craft. At least with my non-fiction I felt I'd had a few years of practice from my years working at magazines. But fiction felt like a whole new world, and the process was also longer: many many more drafts, many more edits. I think that's why novels can feel so fulfilling and special, because they really are a labour of love.

What was the biggest challenge in writing your first novel?
Honestly? My confidence. Even though my non-fiction career was going well, I didn't know if anyone would buy my novel, after spending a whole year writing it! It was a risk, but a risk worth taking. I think that's why receiving positive quotes from other novelists like Marian Keyes and Sophia Kinsella have meant so much to me - especially as I have another novel to write! It feels amazing to know that people have been enjoying Olive and also really understanding the message behind it.

Are there any writers or artists whose work you're enjoying at the moment?
There are so many good books out this year! I've been loving the non fiction of Samantha Irby and Sophie Heawood, and the fiction of Caroline O'Donoghue and Naoise Dolan.

What made you decide to start the Hyphen Book Club?
During this strange time, I have realised that books aren't just a bit of fun entertainment and escapism, but an actual life raft. In my most anxious and down moments, I have turned to my bookshelf. Reading relaxes my mind and whole body. Books really do have the power to transform how we feel, and make us feel less alone. I wanted to spread that feeling of comfort and connection through books, and also raise some money for Mental Health UK in the process by selling The Hyphen Club branded bookmarks.

How has the pandemic affected the release of Olive?
It's affected my ability to meet readers in person which really saddened me. I was really looking forward to my events and festivals. But hopefully, with the power of social media, virtual book clubs and general support online, it will still get out there into readers' hands.