Continuing a series of interviews with women in the PublisHer network, Emma House and Chloe Meek talk to Satenik Anastasian, editor-in-chief of Russian house Popcorn Books 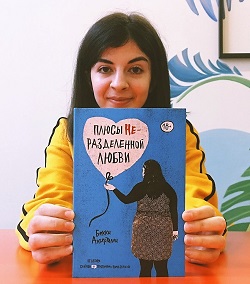 Satenik Anastasian is a graduate of the Moscow State University of Printing Arts. During her publishing career she has worked as a senior editor at Rosman (children's literature), managing editor at UMKA (children's literature), and managing editor at AST (children's and YA literature). She spent three years working as head of content at Bookmate (e-reading service), and in 2018 with financing from Bookmate launched a print publishing house called Popcorn Books (https://popcornbooks.me/), where she is editor-in-chief.

Popcorn Books became the first diverse and LGBT+ friendly publishing house in Russia. It has published more than 50 titles, including translated bestsellers such as Call Me by Your Name, Simon vs the Homosapiens Agenda, Boy Erased, and I Know Why the Caged Bird Sings. Last year Popcorn started publishing Russian authors as well as translated books. The first Russian author on the list, Mikita Franko and his debut book The Days of Our Lives, was shortlisted for prestigious literary awards (NOS, Litsey), and the film rights have been sold.

Why did you choose a career in children's and YA Publishing?
As clichéd as it sounds, I've just always loved YA and children's books - I never really grew out of them! I also love the way good YA books tackle difficult, adult topics without sugar-coating them but still leave the reader with a sense of hope in the end. To me that's magical.

I still get the same feelings of excitement reading these books and knowing that readers will enjoy them. YA audiences are always super-responsive and grateful: I've received so many messages and emails from readers saying that these books have changed their lives. That's what makes it so rewarding for me.

What was your pathway into the publishing industry?
I first realised that I wanted to go into publishing when I was in high school. I watched a movie called The Suburban Girl that really inspired me - the main character was a book editor. At the time I was into writing and always edited my own work, but didn't even know that editing books was a career! That moment was like an eye-opener for me, and it just clicked that this is what I wanted to do.

I later found out there was a publishing university in Moscow and really wanted to get in. When I first applied, I was rejected, which really disappointed me. I thought I knew everything I needed to know to get on the course. Instead I had to do a year's work experience at a publishing house before finally being accepted. Although I graduated with a degree, I didn't end up getting my diploma in publishing because I didn't need it - I had enough experience to get a career in publishing without it.

What roles did you have in the publishing industry before you launched Popcorn books?
I started out at Rosman, which is one of the bigger children's publishing houses in Russia. I was a secretary for a year and then moved into the editorial team for three years. At first the books I worked on were quite simple picture books with not too much text, and from there I progressed to much more complicated books.

I moved on to Simbat books, and made all sorts of branded books with Disney and Marvel characters. After that I moved to AST, the biggest publishing house in Russia, where I started my journey with YA books. It was important for me to work in a publishing house of this scale, as it allowed me to realise that there was a gap in the market for something different, something outside these big publishers' specialities.

From there I went to Bookmate as head of vontent, and mostly worked signing contracts with foreign publishing houses - quite a sideways move into something unfamiliar. But I quickly came back into the publishing world and launched Popcorn books.

Who or what has inspired you in your career?
Harry Potter was my obsession when I was in high school and I still love the books today, they really inspire me. When I realised that I wanted to work in publishing I decided that I would do anything to work at the Russian publishing house that was publishing the Harry Potter books, I would mop the floors if that's what they wanted me to do! As I was finishing high school, I called the publishing house and it turns out they had an opening and took me in. That's really where my career began, and here I am 13 years later.

Could you tell us a bit more about Popcorn Books and what inspired you to launch it?
I think the main element of my inspiration for launching Popcorn books was seeing all the big players in the industry filled with bureaucracy and prejudice, preventing their editors from publishing progressive, quality books.

Popcorn was initially launched as part of the Bookmate e-reading service. My boss and I had always thought that we needed to create our own content, and a print publishing house was a great way to go about that, considering my previous work background in children's and YA.

Soon Bookmate acquired a print non-fiction publishing house called Individuum, and alongside it we decided to open a fiction imprint. I became chief editor of this imprint, creating the name and concept. I instantly knew we had to publish YA books. In the US and UK, YA books are exciting, and we needed to generate that enthusiasm in Russia. Our initial idea was to publish books that other Russian publishers weren't comfortable publishing.

We acquired rights for Simon vs the Homosapiens Agenda and Call Me by Your Name, both with LGBTQ+ protagonists. We had a huge and very positive reaction from readers from the get-go, and that's when we knew we had a niche and were doing something nobody in Russia had done before.

Last year we expanded from just translated titles to publishing our own Russian authors, which is very exciting! As Popcorn has grown and evolved, we've built an amazing community. Our readers love our titles because they trust our taste and judgement in books, and equally, we trust theirs. Our diverse catalogue tackles race, gender, women's rights, sexuality, mental health. The most important thing to us is that we won't publish a book just because of the topic it addresses; we ensure all of our books are still captivating and bingeworthy.

What has been the reaction to a publisher launching an LGBTQ+ friendly publishing house in Russia? Were there any reactions to being a female launching such a publishing company?
When we first announced the titles that we had acquired, it was quite controversial. But the overall reaction was very positive, I think that a lot of readers were excited to see some new and refreshing books being published.

But of course, some people were very angry. As you may know, there's a law in Russia that prohibits "homosexual propaganda among teenagers and children". This law became an opportunity for anyone to bully those who support the LGBTQ+ community. When we launched Popcorn books there were people who tried to bully us as well, but we simply ignored them. In terms of publishing, the law just means that any books with queer characters or narratives must be wrapped in plastic and marked with an Aged 18+ symbol.In terms of being female and launching a progressive publishing house, I think weirdly it might be even a little easier for me than it would be for a man. People have speculated about my sexuality, but I don't care and just ignore it. For men here, that might be tougher to deal with.

What has been the biggest challenge of your career?
When we first launched, bookstores believed the books wouldn't sell. They seemed to have a notion that queer books would sell only to queer readers, and that there were no queer people in Russia. So convincing bookstores that queer books can be very popular too and not only among queer readers was a massive challenge.

Another challenge for me was finding a balance between quality and affordability. Our readers are mostly in their late teens/early 20s, so most of them don't have a steady income or an income at all. Finding the price balance was very hard, but I think we got there.

What has been the proudest moment of your career?
As funny as it sounds, a defining moment was when we started getting into auctions for queer books with other publishing houses. Three years earlier, when we launched Popcorn, nobody wanted these titles apart from us, and when I worked at a large publishing house it was near impossible to convince anyone to buy queer titles for the Russian market. Now we've kind of created a trend and open-mindedness, so all the publishers are buying queer books. On one hand it is slightly frustrating, because the big guys can always beat us in an auction with more money. But on the other hand, I still feel immensely proud, because in the bigger picture this is very important for a lot of people and for our country.

Another thing I'm extremely proud of is the fact that last year we published our first queer Russian author. The book is selling well and has been shortlisted for multiple awards. We've now sold the rights for it to be adapted into a movie and sold translation rights to two territories.

What advice would you give to other women in the industry?
My main advice is don't be afraid to make others uncomfortable. If you know how to do your thing and you believe in it, don't take no for an answer. Nothing is set in stone. Big publishers are like dinosaurs, and if you don't fight for fresh and progressive ideas nothing will ever change. However, I would also advise you to choose your battles. Never spend too much energy on things that don't matter or that you don't really believe in.