Continuing a series of interviews with women in the PublisHer network, Emma House and Jennifer Lodge talk to the founder of Argentina-, Spain- and Mexico-based Trini Vergara Ediciones 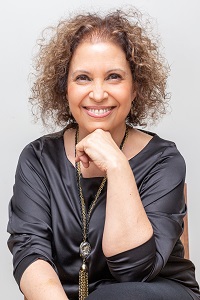 Trini Vergara is the founder of newly established Trini Vergara Ediciones, based in Buenos Aires, Argentina; Madrid, Spain; and Mexico City, Mexico. With a masters degree in economics, she started her career in her family-run publishing company Javier Vergara Editor, which she left in 1996 when the company was sold. Together with a business partner she launched V&R Editoras before selling her shares in 2018. She spent two years as president of the Argentine Chamber of Publications, and founded Entre Editores, an umbrella company that saw the establishment of a national publishing conference, a national training school for publishers and a new subscription service book club called "Mujeres que Leen" - (Women Readers). She founded Trini Vergara Ediciones in 2021 after two years of R&D, and published the imprint's first books this month.

You grew up in a publishing family: did you always want to follow the family footsteps and become a publisher?
I grew up in a house with lots of books and lots of chatter about the family publishing company, which both of my parents worked at. My parents were hugely passionate about what they did and were natural storytellers; publishing made them happy. While my parents didn't explicitly encourage me to choose publishing as a career, it was certainly subliminal - I absorbed their passion as I grew up and had a leaning towards being creative. What really struck me was that having a publishing company, you really could publish whatever books you wanted.

This led me towards thinking about studying literature at university. However, I knew by thinking about the bigger picture that publishing was a business and that I would need the skills to think about the business side of things as well as the creative side. The definitive moment came after my studies, when I took a year off and travelled to Europe. At the beginning of that year I went with my parents to the Frankfurt Book Fair and spent days walking around Hall 4. I realised how global the industry was and how it was a world of people publishing great stories. This was my lightbulb moment, and I knew there and then that this would be my career, with or without the family business.

Between 1986 and 1996, you worked for your family's publishing house, Javier Vergara Editor. What did this experience teach you and why did you decide to spread your wings and leave the family business?
Those 10 years were a real education. My first role was in both production and publicity, and as there was no publicity department, I had to launch this function and department to gain exposure for our books. This was in a time before social media, so I made many friends with journalists and people in the media. I ran this department for about four years.

I then moved into the editorial department and started a new line of business books called Business Class. I read a huge number of books about different areas of running businesses which became a good lesson in how to run a company. I joined the board of the company and started to share decisions with my parents and other members of the board, which opened my eyes to the international markets. My parents had offices in seven countries, and we regularly brought everyone together for one big meeting which gave me many valuable insights. I learnt that publishing may be very international in the way it works, but the rules of the core business are generally the same the world over. I felt like a global player.

The decision to leave came with the decision of my parents to sell the company. It was was a shock for me - I didn't agree with them. After I had left my parents' house on the evening they told me, I decided to leave and create my own company. I did this in 1996 with a business partner, and we had many successful years of running the company together before she sadly passed away in 2011. I eventually sold my shares in the business.

I then spent three  years "in transition", becoming president of the Camara de Argentina de Publicaciones (for two years) and founding Entre Editores, an umbrella company that housed a new Escuela de Editores (School Of Publishers) to encourage young people into the industry. I set up a national conference - the “Colloquium for The Future of Publishing” as well as a new book recommendation platform, “Mujeres que Leen” - Women Readers, which led to “Women Readers - the Club”, a subscription-based literary box book club. All of this came on the back of conducting major surveys of women who are avid readers in Argentina, Mexico and Spain, which created some interesting datasets about book-buying consumer trends.

Has anyone inspired you in the field of publishing?
I have read many biographies of publishers, and one which has really stuck in my mind and inspired me is that of Michael Korda and the story of Simon & Schuster. I was struck by his story of leaving Hungary, escaping communism, and travelling to New York, and working extremely hard to build his career. He was a ferocious editor! I also admire Beatriz de Moura, who built Tusquets Editores - she is fabulous.

What is the proudest moment in your career?
Yesterday! I found out that one of our first books published in Spain a week ago has already sold out and needs to have a new print run.

Do you find that being a woman has created barriers in your career? Particularly in reaching senior positions?
Because I worked in the family business and since then have always worked for myself, being a woman has not been a problem. When I became president of the Camara, however, I worked with a lot of men who didn't seem like to have a female boss - but that is a political rather than a business organisation. Argentina is the most egalitarian country in South America - women are much freer than Chile for example. It's different.

I do have a personal theory of the disadvantaged. Being a woman is a disadvantage. I was born in Chile before coming to Argentina, and again living in Spain, I was a foreigner, I felt this too was a disadvantage. Through hard work and a constant will to learn, however, I managed to succeed.

Your new publishing house, Trini Vergara Ediciones. is based in three countries: Spain, Mexico and Argentina, and publishes all its books, in all formats, simultaneously in all three countries. What have been the challenges in starting such an operation?
From an early age I learnt that you must think globally and not just locally. Argentina is an important but complicated country, and the Mexican and Spanish markets are the biggest. By having offices in those three markets you are covering almost 80% of the Spanish speaking book market.

By having local offices, you can develop local authors, understand local tastes and needs, and react quickly.  I spent two years preparing the company to be able to publish simultaneously in all three markets in all formats, which is definitely a challenge. But I have an experienced team, and we communicate every day. For me, having this programme of simultaneous publishing was extremely important.

We publish commercial fiction under two imprints, Motus for thrillers and Gamon for fantasy.

What excites you the most about the future of the international publishing industry?
I'm excited about the new opportunities for small publishers and small bookstores. Digital is more egalitarian and provides many more opportunities to reach more readers. Across the industry we have consolidation of the market and we have Amazon, but I don't feel threatened by the big groups and I feel that online bookselling is democratic. I believe we can be successful despite consolidation in the market. Agents and booksellers are paying more attention to new publishers, small publishers that have  commitment, originality and passion, and renewed ideas. We are seeing many new authors emerging from many different countries, and more agents and publishers bringing these voices to the world.

Do you have any advice for other women looking to succeed in the industry?
Work hard, be successful and fulfil your goals. I follow 4 rules;
1) Show commitment to your cause or goal. Really go for it and be committed - which will help you all the way.
2) Planning - in the medium term - not short and long term. You must imagine yourself and what you want to do, where you want to be.
3) Adapt, adapt, adapt. Play by the rules but be creative!
4) Educate yourself in your speciality; prepare yourself, take courses, download webinars, speak with colleagues, learn as much as you can.

You are then a warrior.