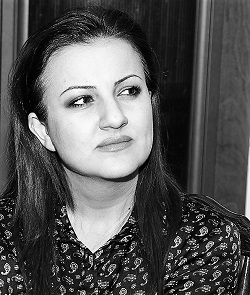 Having worked for 10 years in the corporate world, Arevik Ashkharoyan decided to pursue a career inspired by her love of reading. She started a literary agency with a partner in 2010, and helped establish the Armenian Literature Foundation in 2014. In 2016 she launched the ARI Literary and Talent Agency to represent literary and creative talent of Armenian origin from round the world.

In 2017, Ashkharoyan launched a non-profit organisation, the ARI Literature Foundation, to implement projects aimed at the development of the publishing sector, establishing international dialogue and promoting reading and writing.

How did you get into the publishing industry - what is your journey to now running ARI Agency? How did you manage to move from the corporate world to publishing?
The first 10 years of my working life were spent working at international and local non-profits and state organisations. Just before my 30th birthday, I realised that I wanted to do something of my own and to stop working 9 to 6 for someone else. This was a very important and life-changing decision, which I will never regret. I didn't know what I wanted to do at that point, but I knew that I really wanted to work with books, as reading has always been my passion, and the publishing industry sounded very attractive to me.

I talked to a publisher acquaintance about this, and he told me that there was a missing link in the local industry called a literary agent. I had to google it and watch movies about writers and their agents. That's when I started researching the local literary scene, and I was surprised at what I found. Small countries like Armenia, especially those with a Soviet past, have a bad tradition of underestimating their own writers. My generation was brought up on Tolstoy and Dostoevsky; the mark of big empires on smaller nations is always overwhelming. But for Armenia, with an ancient history and past we are so proud of, it takes time to accept the values of modern times.

So, with a partner, I started the first ever literary agency in Armenia. I learnt the job from ground zero, how publishing industry works - not only locally but internationally. In about a year, it was obvious to me that this would be the job I would do for the rest of my life, and in 2016 I left my business partner and established ARI Literary and Talent Agency. Now I work with about 15 Armenian contemporary writers, as well as promising emerging writers or total newcomers. Among my clients are some of the best authors in Armenia, and I am proud to be working with them.

What challenges have you faced in your career and how have you overcome them?
The first challenge you face when you represent literature from a small country is pitching it to publishers who have never heard of your country. You need to tell them where you come from and give them some background about the country, language and history before you start talking about literature.

Another challenge was to realise that only agenting and selling rights of Armenian authors wouldn't earn me a living wage, let alone sustain a company. However, it was also obvious that I wasn't going to give up this profession for an employed role. So, we started offering services to help us cover necessary costs. And now we also have a long list of clients - independent local publishers who buy rights with our help.

The others problems we face include the lack of creative writing training and other necessary conditions for the development of the book market in Armenia and its promotion worldwide. To solve this, I established a non-profit organisation called the ARI Literature Foundation, which is implementing projects to provide those conditions not only for me, but the wider industry.

ARI Foundation is now working on such projects as Write in Armenia International Writing Camp to create dialogue between young and emerging writers from different countries and to find and train the new generation of Armenian writers. Another project we do is Let's Read! Clubs, to promote reading from a young age and ensure a new generation of readers. A recent endeavour - Zabel International Women Writers' Forum, which we are starting in October 2020 - is to invite established women writers from all over the world to share their experiences and empower young women writers in their future careers.

The biggest challenge, though, is the shortage of professional literary translators from Armenian into many languages. We have tailored a Translators' Association and Residency Programme, and are now trying to find funding for its implementation.

I do understand that most of these issues should be solved by the government, or, at least, by governmental funding of non-profits. But - this is not only true of Armenia - changes first come from individuals before they find solutions in cultural policies and subsequent state-funded programmes. At least there is the translation support project from the national Library of Armenia, Armenian Literature in Translation, which is also a result of private and non-profit representatives, including myself, lobbying for it for years.

What do you most enjoy about your job?
I really enjoy book fairs: these are always my happy moments. And of course, with every new edition of the books, it's like a new and stronger motivation to continue my work. But there are many other moments to look forward to, such as conversations with writers and feedback from readers.

Once a friend told me that it must be amazing to get paid for reading books. Yes, it is amazing, unless you have to first earn the money then to pay yourself. But it is still worth it.

What have been the highlights of your career in publishing?
Every next rights deal is a special highlight for me. These deals are made with such difficulty, and the foreign editions come so late that I haven't yet got used to the moment of holding a physical copy of a new foreign edition of a book I represent in my hands.

I do believe that the real highlights are still to come, and one of them would be to sell movie rights to one of our books. I represent a wonderful fantasy novel, which has a great movie potential.

What is so special about Armenian writers?
Every literature is special in its way. Armenian literature has some outstanding storylines and ideas that can be described as searches for identity at national and personal levels.Anyway, the novels and short fiction that I represent are selected to fit different readers and will come as a surprise to many of them worldwide.

Has anyone inspired you?
I was inspired by some agents I met in the very beginning of my career, and all three of them have become my mentors, I still keep contact, work with them and hang out at book fairs around the world. My godmother in agenting is Bettina Nibbe from Nibbe Literary Agency in Munich, whom I met during her trip to Armenia for a publishers' forum in 2011. And the other mentors and friends are Nermin Mollaoglu from Kalem Literary Agency, Istanbul and Rema Dilan from Peter Lampack Agency, NY. Outstanding women and personalities.

What is the situation for women in publishing in Armenia?
The situation is very complicated. There are neither many female publishers, nor writers. However, women are a majority among translators. Armenia has a controversial history of women in leadership, such as the first woman diplomat in the early 20th century, whereas in many European countries women still couldn't vote, and, at the same time, quite a traditional and conservative society later.

Right now, with revolution and government change two years ago, the situation is slowly changing, but there is still along way to go for women to break through in this sector and many others. The question why there are not many women writers among outstanding classics is unfortunately still not clear to many. And the question about why there are not many today in Armenia is still to be addressed. It is interesting that when we do a creative writing programme for young writers, 90% of applicants are young women. But when it comes to getting first books published, it is vice versa. Something is preventing young women from choosing writing as a career, and the reason could be the attitudes of a traditional and conservative society. But this will change gradually with every success that women achieve.

What do you do in your spare time?
My job is a lifestyle. My spare time is spent mostly on reading or watching movies. But since I am also a proud mother of two, I try to spend as much of my free time with them as possible. Apparently my best communication with kids is either through reading for them or discussing the books they have read. They are great readers and I find it very effective to teach them things through books.