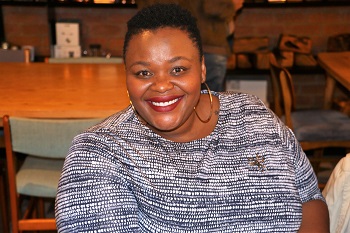 Thabiso Mahlape is the founder of Blackbird Books in South Africa, an independent publishing house that is dedicated to giving young black writers a platform (www.blackbirdbooks.africa). She holds a bachelor of information science degree specialising in publishing from the University of Pretoria. In between juggling submissions, proofs and sales, Mahlape is a columnist: she writes regularly for the Sowetan newspaper and has contributed to magazines such a Destiny and VISI. As a writer and a speaker, her focus is largely on self-development, body politics and what it means to be a black woman in South Africa. She is part of the Mail & Guardian Top 200 in 2017 and OkayAfrica Top 100 Women in 2020, and was awarded a Certificate of Excellence for her work by the Premier of Gauteng, David Makhura.

Tell us about your journey into the publishing industry- what attracted you to the industry and how did you start?
I wasn't attracted by the industry actually; it was an accidental relationship. I taught myself how to read because I had a burning desire to be learn English after suffering some humiliation at age 7.

I started with my father's newspapers, which he brought home every day. I soon graduated to books. I don't know or remember how I first came by those condensed Reader's Digest editions; I found in them for the first time the wonder and joy of being lost in a story and absorbed by characters.

I did not have the idyllic childhood of being read to, so I never read any age-appropriate books. But from thereon my relationship with words and stories was born. In high school I would write stories in a notebook and loan it out to school mates as a library would. They'd come back worn and torn but I was happy that they had been read. When I finished high school, with my limited knowledge of what else was there I thought that the only way I could pursue that passion was through journalism. At the age of 16 I didn't know that publishing was a career that you could enter in South Africa. This was partly due to lack of representation in books (all books were by white people). I saw bylines in newspapers by black people, hence my leaning towards journalism. I didn't know that you could study publishing.

But just before I was to leave to study, I was recruited into an engineering programme because of my good results in maths and science, and thus began the biggest nightmare of my young life. I spent four years depressed and wishing I'd die.

After failing horribly in the last year, I eventually told my dad why, and luckily he remembered who I'd wanted to be, so he agreed to pay for me to go and try again at something I loved.

When I arrived at the University of Pretoria, the journalism class was full. Someone advised me to study publishing, and the rest is history.

After you finished studying, how did you get into publishing and what led you to set up Blackbird Books in 2015? What do you hope to achieve with the publishing house?
I finished studying in 2008, and had 18 months doing odd jobs here and there. In July 2010 I applied for an internship programme run by the Publishers Association of South Africa (PASA). They told me I had been placed with Jacana Media, but when I arrived, they knew nothing about my internship! They were very gracious however, and took me on. That was a decade ago. After the internship they kept me on doing all kinds of odd jobs, and I decided to give myself the job title of junior publisher. I worked in the submissions department and discovered the book My Father My Monster (by McIntosh Polela), which I worked on with a senior publisher. The book really was quite ground-breaking and really delivered in terms of numbers.

As a junior publisher I spent a lot of time in commissioning meetings with only white people who were able to name drop lots of people they could approach for books. It really made me wonder whether I fit into the industry, as I couldn't contribute to those conversations. However, the best piece of advice I was given was, "Contribute by saying the names of people whose stories resonate with you." I did this, and found I was able to participate much more actively.

I soon gave myself the job title of "publisher", and by 2013-2014 I reached a ceiling with my career. A few books in I had already published a book that won the biggest book award in the country at that time, and I was already feeling, what's next? I knew I deserved a higher salary, but because the company couldn't pay me what I wanted I reduced my hours to three days a week and set up a consultancy business. In 2015, I used the consultancy business to set up a JV imprint with Jacana, and we called it Blackbird Books. I really welcomed this opportunity with both hands, especially because it meant I could publish just the stories I wanted to publish and that black writers would have a platform dedicated for them.

The arrangement worked for four years, but in the end we had very different views on how Blackbird could be a different way of publishing, and in April 2019 we realised it was the end of the road for the JV and that I would have a year-long exit plan. April 2020 came around very quickly, and before I knew it, we were independent with the freedom to try new things.

Now that I am independent, I want to turn this into THE literary gateway into Africa. What I mean by this is that at the Frankfurt Book Fair there were lots of people actively looking for African writers and content. But successful African works usually had an element of northern influence - they were by people who had left Africa to go to the UK/USA. My vision for this publishing house is that Africans need to define and be settled with what African content is. It will be a platform where authors are not asked to conform or shy away from ideas because they are not palatable to someone who was not in Africa. It will be African stories by Africans and for the world.

What challenges have you had to overcome in your career?
Being spoken down to, by a lot of the people in the industry and within the company that I worked for. What was hugely frustrating was the need always to justify my reasons for all of my decisions when my counterparts didn't have to.

A huge challenge now is to be publishing for a market that is largely still trying to find itself in as far as books and reading are concerned, after having been ignored for so long. Representation has many layers, and we are a very diverse country with 11 official languages; we need many black publishers to really cater for the market. The black readership is not homogenous, and being expected to cater for all is very challenging.

But perhaps the most painful challenge I've faced is to have mistakes threaten your career when others can just glide past theirs.

Have you had any role models that have inspired you on your publishing journey?
Toni Morrison. I realised that I sit in a place where I can do for South African black writers what she did for Americans. And because I really want to be able to write, and hope that one day I can be able to retire well in time before my mind leaves me and write, just like her.

I have had other people that inspired me since that initial inspiration, but hers was most definitive.

What are you most proud of in your career so far?
Mostly, staying in it, when it is so hard with few returns.

But I am most proud of the writers whose careers I have been able to help start, the confidence my "Yes" has given them to soar. This really warms my heart on days when the spreadsheets are more red than black, like now.

What is the environment like for women in publishing in South Africa? Are there any programmes or initiatives that support women in the publishing sector to get ahead?
Even though the face of everyday publishing is women, not talking about CEOs and boards, there aren't any initiatives like that. No one has stopped to really think about how we give women more leadership positions and strengthen and grow their careers. If there is, I am not aware. And of course, the government ministry (Arts, Sports and Culture) under which we are lumped seldom ever has the word publishing in any of their communication about the arts.

How has the environment for black writers changed in South Africa over the last five years since you started Blackbird Books?
This is weird to answer so I am going to borrow from someone.

"BlackBird Books has broadened the space for black narratives and experiences. It has given a voice to those whose life's journey can impact broader society" - Redi Tlhabi, broadcaster, journalist and author.

I do believe that the presence of Blackbird Books and the visibility of Thabiso Mahlape as a publisher have encouraged a new wave of literary interest in the country. We have seen more book clubs and a wave of self-published authors, because this platform created an energy that could be tapped into.

You are a writer and speaker yourself: what are you passionate about when it comes to writing and speaking?
I write about my life a lot. My dad doesn't always enjoy it because unpacking my issues means delving into a lot of our shared history as a family. But he is particularly proud when I tackle misogyny and call it out. I don't think he particularly wants any of us (three daughters) to get married; I think it comforts him knowing I would never allow a man to treat me as anything else but what he brought me up to be.

Mental health, women and society are generally my interest.

What do you think of the PublisHer initiative?
From the minute I met Bodour (Al Qasimi, IPA vice-president and founder of PublisHer) I had renewed hope of what support can look like. I am especially proud and supportive of the platform because I have met and seen her heart. Sometimes people start things because they tick boxes - this is not one of them.

How do you think we can encourage and support more women into senior positions in the publishing industry?
I try to offer my ear and expertise where I can.

I hope to be able to grow some pushing women leaders in my own company, so if you know anyone keen on investing in a small African press, let me know.