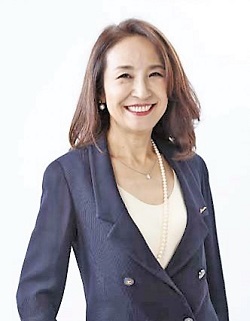 Yumiko Hoshiba is a graduate of Ochanomizu Women's University, a national university in Tokyo, Japan, with a cognitive psychology degree. After graduation, she worked as an editor at one of best known magazine publishers in Japan. In 1985, Hoshiba co-founded the publishing company Discover 21 Inc, in Tokyo. Since then, she had been the president of the company, overseeing its management and operation until the end of 2019. She now runs a new start-up publishing company called Hoshiba & Company.

In 2013, Hoshiba was elected to become a board member of JBPA (Japan Book Publishers Association) and is now the vice president of its international committee. She was the first and only female board member of JBPA, representing the voice of female readers in Japan. She has also been active in promoting Japanese publishing industry both inside and outside of Japan and is a member of the IPA Executive Committee.

At university you studied cognitive psychology - what led you to get into publishing? Why did you decide to become an editor?
In Japan, when I graduated from university, it was common for women to become full-time housewives after giving birth to their first children. The publishing industry and the civil service (including teachers) were some of the only workplaces in which a woman could work for a lifetime. I entered and passed the examinations for national government officials and for teacher recruitment. At the same time, I also succeeded in the interviews for a magazine publishing company. There were many female students who wanted to be editors in the publishing industry, especially for fashion magazines, so the competition was much much higher than for any other companies. I was proud to have succeeded and therefore decided to join the publishing company. Additionally, I didn't like the idea of being bound by the rules that governed the life of a civil servant, I was more attracted by the idea that I would be living a freer and more flexible life.

In 1985 you co-founded your own publishing company - what inspired you to do this? How did you get started and what was your initial publishing programme?
There was someone who funded me to start a publishing company, and the timing coincided with my thinking that I wanted to edit books, not magazines. I started from scratch, and I didn't know any authors who would write for us, so I produced so called “gift books” by translating popular books from the United States. Following on from that, based on feedback from readers, I published a lot of books on the words of love and the words that would make the readers feel good when they read them. They became huge hits.

How did you manage to build up the company? What challenges did you face?
How I managed to build up the company:
1) We cultivated bookstores that dealt directly with us and managed to work with the top 5,000 bookstores (out of 12,000) as our customers. We created a unique customer management system for that purpose.
(2) Continuing to produce original books and attractive authors that sell well at a bookstore that makes them want to trade with us.
(3) Actively worked on branding and public relations activities such as mainstream and social media, and forming fan clubs.

The challenges I encountered:
In Japan, there are two major distributors called agents, but unlike those of other countries, they play a role like that of industry banking. They have the right to decide what and how many copies to deliver to which store; and they own all the data on returns and sales. There are huge disparities in trading conditions and settlement terms determined not by the current sales volume of the publisher but by previous vested interests. New small publishers with no connections are basically denied the deal. Then, after a short period of direct trading with bookstores, you will finally gain a degree of credibility and are allowed to trade through the agencies, but with the most disadvantageous conditions.

Because I felt repulsed by this unfair old system, I refused to deal with the agencies after we grew bigger and more successful, and continued with direct trading for a long time, but there were two major difficulties.
(1) Bookstores didn't like it (voucher work, accounting work, returns work, etc. can be done in a batch if you go through the agency, but for direct trade with publishers, they need to carry out separate work, which increases costs and is more work for employees).
(2) Employees dislike the job of sales (although many students have aspiration to work for publishers, most wish to become editors)

How I overcome those challenges:
Regarding (1) We kept publishing books which sold well and gained a lot of fans. Over the course of time, there were more and more bookstores who wanted to trade with us directly.
Regarding (2) I have made various management efforts to improve and maintain the motivation of employees.

You started another new company this year. Why did you start a new company? What are your aspirations for this company?
With my previous company's investors, I made a promise to retire at 65. Even without the promise, I believe that once the company grows to a certain level, it belongs to the employees, and I thought that young people should take over. If the founding president stays forever, young talent will not grow. I find it's not attractive! However, since I am not old enough to retire, I wanted to start a new, small publishing company by myself without worrying about getting in the way of young people.

What are you most proud of in your career so far?
My proudest achievement is growing the company: we created a mechanism to trade directly with 5,000 major Japanese bookstores without going through distributors; and that made us the number one publisher of this business style in Japan. We launched project after project that were so successful that other publishers imitated us; we discovered new authors and enabled their careers in such a way that not only the (now famous) authors but also their readers thanked us. I have developed a company that many students wish to work in - not just any publishing company, but specifically for Discover 21.

Why did you decide to get involved with the JBPA (Japan Book Publishers Association)? How did you find the environment there? What are you hoping to achieve there?
Just as Google was about to gather information about books and Amazon was about to start ebooks, I entered the JBPA. Since various changes are coming to the publishing world, I thought it would be necessary to collaborate with other publishers.

I was elected to be a director a few years after joining JBPA. I was the first female director in JBPA's more than 60-year history. This is because the JBPA's membership is limited to the presidents of publishing companies, and of the 1,000 Japanese publishers, there were only a few female presidents. It may be a little more now.

While my company has had a stand at the Frankfurt Book Fair for more than 10 years, I was resentful at the low Japanese presence there and at the JBPA, I called on other publishers to exhibit as well, and to make their attendance more proactive. I encouraged them to sell their rights overseas and achieved some results. Because of these achievements, I was appointed as the Japanese member of the IPA's EC.

You are also now an executive board member of the International Publishers Association (IPA). What does this mean to you?
As I hear about the expansion of education, freedom to publish, and protection of intellectual property in other countries, I am reassured of the mission and the significance of publishing. I'd especially like to contribute to the efforts around the freedom to publish in the world.

And in Japan, publishing is mainly for entertainment, centered on comics, or for the means to learn skills useful at work. I would like to turn the industry around to catch up with the international trends.

What is the environment like for women in business in Japan? Especially female entrepreneurs? And for women in publishing? Do you feel this is changing at all?
The law for equal employment opportunities for men and women has been enforced, and the government has set a target for the ratio of women in managerial positions. The legal system for women to continue working has improved considerably over the last 30 years. However, in 2019, Japan was ranked 121st out of 153 countries surveyed in the "Gender Gap Index" (which shows the degree of gender equality around the world) announced by the World Economic Forum (WEF) every year. The government's goal of 30% female managers in companies by 2020 has not been achieved at all - it is less than 10%. Fewer than 4% of women executives are in listed companies. In addition, the ratio of female entrepreneurs is 15%, which is also low in the world.

The same is true for the publishing world. However, it seems that women working in the Japanese publishing industry are less interested in management and career advancement than those working in companies in other fields. Most Japanese publishers are owned by the founders' families, and sons have been assumed to be the rightful successors as presidents. But recently, due to the shrinking trend of the publishing industry as a whole, heads of small and medium-sized publishers are not being succeeded by sons but by daughters. I think there will be more and more cases of daughters inheriting publishing companies. In addition, when it comes to small and medium-sized publishers, there are aspects similar to being self-employed. I feel that it is a relatively good job for women to develop their talents without having to adapt to a male dominant society.

Do you know of any programmes or initiatives to support female leaders and entrepreneurs in publishing in Japan?
Unfortunately, I don't know of any. However, there is a voluntary group of women working in the publishing world, mainly sales staff who hold a get-together once a year. I took part only once. At that time, more than 100 people were gathering.

What do you think of the PublisHer initiative? How can it help you? What can you contribute? How can it help other female publishers in Japan?
I think the network is a great attempt to support women in publishing around the world, and thanks go to Bodour Al Qasimi for doing this. I think that if you organise regular online meetings and Facebook groups that any woman working in the publishing world can join, I will encourage all Japanese women in that world to speak out and take part. And if you would have a real meeting or party in Frankfurt or elsewhere, some of them will be able to join and make friends in the world publishing community. That would be great.