The journalist, editor and lecturer contributes to our Q&A series 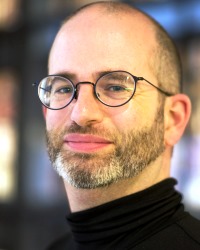 Describe your current job
I've just this month started an exciting new job as lecturer in publishing at the University of Stirling, where I'll be teaching graduate students all about our industry; I also work as a freelance publishing journalist, editor, trainer, social media consultant, and occasional author, and I'll be continuing with all of those too.

What was your first job in the book industry?
My first full-time job in publishing was as an editorial assistant for ProQuest in 2003; the work was very varied, ranging from checking links that a bot had marked as broken to writing gazetteer entries for towns that were too small to be included in the reference works we'd licensed.

Who has been the most influential person in your career?
The person most responsible - or most to blame! - for my continuing to have a career in publishing after 2008 is John Tuttle, former head of the New Directions Group at Cambridge University Press. I was in the process of handing in my notice and returning to teach in Japan after three increasingly frustrating years working as a project manager in Cambridge's educational software division, but he persuaded me to stay on to join a new innovations unit working on new technology and new business opportunities. That got me attending conferences and fairs; then I started getting asked to give talks and write articles, and that set me on the path that eventually led to my new role teaching people about publishing.

How has the industry changed since your first job?
When I started out in publishing, I was working at what was then the cutting edge of digital publishing, but even that's unrecognisable from today. The launch of the Kindle was still four years away, and audiobooks were something that you bought - or more likely borrowed from the library - in a big box holding 10 or more CDs. The closest you got to a smartphone was your boss's Blackberry, with its tiny screen and email keyboard, and you'd never dream of reading a book on it. Publisher websites looked like this, and very few publishers engaged directly with their readers.

Since the high point of between 2009 and 2014, though, much of the willingness to experiment - in terms of forms of content, in particular - has disappeared, and been replaced by what you might view uncharitably as complacency or conservatism - or perhaps more reasonably as a pragmatic acceptance of what the market wants.

What are the most interesting things you're seeing at the moment in the industry?
I'm intrigued by the way that research funding bodies in the academic sector are endeavouring to use the influence that their money brings to accelerate the move to open access. By announcing that they will in future fund only research whose outputs will be available through open access, the groups that comprise cOAlition S have taken hold of the reins and created huge challenges for publishers whose business models are based on journal subscriptions. The survival of some of the most valuable sectors of the scholarly publishing industry in the future - learned societies and university presses rather than huge multinational corporations, which will survive regardless - may depend considerably on the extent to which they're willing to work collaboratively with those sectors on solutions to those challenges.

What do you think might be the next big thing?
I've rarely been the most reliable predictor of the future of publishing, though that doesn't really distinguish me from the rest of the media, which have been quick to herald everything from enhanced ebooks to the half-size paperback format known as flipbooks as the future of the industry. However, my PhD is all about mobile storytelling, and I write in some depth about the publishing industry's short-lived attempts to engage with the opportunities that smartphones offer. I'd love to see publishing looking again at the possibilities for telling stories that make use of the functionality we all have available on our phones, from geolocation to cameras to interactivity (though I'm not optimistic). The work of the Ambient Literature project shows some of the exciting things that can be done.

How are you coping with working from a home environment?
I've been working from home since I left CUP in 2016, so I'm used to it now!

How do you think the industry will come out of this current Covid-19 crisis?
I think there'll be a greater acceptance of working from home, and I really hope that this will help increase opportunities outside London as publishers realise that you don't need to cram far too many people into overpriced office space within a London postcode to have a functioning company.

What do you most like doing when you're not working?
I'm working on a novel set in a fictional French city in the early 1900s, fitting in 50 words every day alongside my PhD research and freelance work. It's based on an idea I had in 2011, but I didn't start work on it properly until late 2018. I've just passed 40,000 words and hope to finish the first draft next year.

What is the best book you've read in the last year?
Discounting Graham Greene's The End of the Affair, which I reread in January, since it's been my favourite novel for many years now, the most enjoyable book I've read this year has been Lois Austen-Leigh's The Incredible Crime. Written by Jane Austen's great-great-niece and republished as part of the excellent British Library Crime Classics series, it reads like a cross between Northanger Abbey and a cosy crime novel - the reader's never quite sure if it's a detective novel or not!

What are you reading now?
I'm juggling Ian McEwan's Enduring Love - not one of his best, I'm afraid - and Stephen Fry's excellent reading of the Complete Sherlock Holmes on audiobook.

How do you like to read: on screen, on paper, or do you listen to audiobooks?
Over the past few years, I've found myself listening to audiobooks more and more, and lockdown - and the side-effects of what was probably a bout of the virus - have just increased this further. That said, I'm writing this sitting in a room containing 11 bookcases, and I've more than 1,000 ebooks on my Kindle app, so I'm somewhat catholic in my preferences.