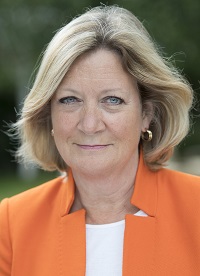 What is your job?
I am responsible for internal and external comms for Hachette UK.

What was your first job in the book industry?
I started as secretary to the children's publicity manager at what was then William Collins. Starting as a secretary was virtually the only way in for women. Although it seems odd now, then almost everyone had their own secretary or assistant, and starting out as one was a sort of apprenticeship, as you shadowed the person you worked for and learnt how they did their job in the process. I was probably the world's worst secretary - I had lied about being able to do shorthand and I could barely type, so I knew I had to talk my way into another job before I got found out. I became a press officer quite quickly - I think the powers that be could see I was better at talking than typing.

Who has been the most influential person in your career?
That's so hard - I have worked for and with some of the very best and most talented people in the industry over a long time, all of whom have influenced me in one way or another.

How has the industry changed since your first job?
In so many ways! Really in too many ways to mention here, but I think some of the most important changes are happening now. At last we are attracting talent - publishers and authors - from a far bigger pool. There is so much talent from all backgrounds in the industry, although we still have a long way to go before we are truly representative. It is very tough to get a foot in the door, but this is an exciting time to be beginning a career in publishing. I think it is more egalitarian that it ever was: when I started you were meant to know your place and to work your way up before you were taken seriously. Now I hope everyone feels they can and should contribute their ideas and that their contribution to the business they work for is properly valued.

What's the biggest challenge in your job?
There are some big challenges and some little ones but none of them are that big a deal.

What's the best piece of publishing-related advice you've ever been given?
Oh, I have been given loads and probably ignored or forgotten most of it. What I would say is that I feel so grateful to have worked in an industry with so many people I like and admire, many of whom have become good friends. No one told me it was going to be so much fun or that I would have so many laughs.

What are the most interesting things you're seeing at the moment in the industry?
There is so much creative thinking going on around how to reach readers and really deliver what they want to read, where and how they want to read it. And I am sure the current growth in audio is only the beginning - listening to books and podcasts is as pleasurable, as engrossing and as formative as reading on screen or on a page, and it's going to become more and more the method of choice.

What do you most like doing when you're not working?
Reading, walking, seeing friends, giving my children advice...

What is the best book you've read in the last year?
Joe Country, the latest Slough House novel by Mick Herron, in which he proves you can start with a great idea and just keeping improving it - each book in the series is even better than the last, and I hope he keeps writing them forever; and Andrew Miller's Now We Shall Be Entirely Free. Both published by us, these novels are among the best things I have read in quite a while. And I absolutely loved Sally Rooney's Conversations with Friends and Normal People.

What are you reading now?
I've just started The Cut Out Girl by Bart Van Es. It's almost unbearably moving from the first page.