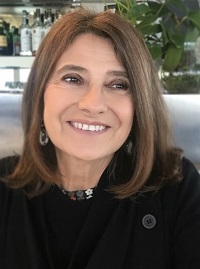 Describe your job
My key tasks are connecting people, different cultures and needs, empowering the Bologna marketplace with the contribution of all the players in the publishing industry chain, and taking the value of the Bologna Book Fair brand across the world.

What was your first job in the book industry?
After working in PR, I came to the book industry in the early Nineties, when as the event manager at BolognaFiere (the owner of the book fair and many other trade shows) I was asked to organise the Bologna Children's Book Fair Awards. I then started regularly attending the Frankfurt book fair and meeting with publishers.

Who has been the most influential person in your career?
The person I have learned most from in my work is Mauro Malfatti. In 1999 he was the sales and marketing director at BolognaFiere when the director of the book fair decided to retire, and I was an event manager. Mauro believed in me and decided I could become the new BCBF director. I remember how scared I was, and also how difficult it was to work with him - he was very demanding. But I learned so much from him: his vision was decades ahead, his perspective was innovative and radically global.

How has the industry changed since you started?
The importance and economic value of the children's book industry have increased enormously, the number of publishing houses has multiplied and, above all, publishers from various countries have entered the world market and, in just a few years, have become important players in the international industry. In addition, the ease of travel and communication has made the market much more democratic: today, small but high-quality publishing houses can be seen and appreciated and thus achieve great success. Globalisation offers the possibility to access a global market, no matter if you're big or small. Ideas travel across the world, and for the first time ever it's easy to gain the world stage.

What's the biggest challenge in your job?
The biggest and most interesting challenge is to find the right balance between the different activities we are engaged in not only in Bologna but internationally, in order to maintain the strength and appeal of the annual fair in Bologna, to constantly increase the value of the China Shanghai International Children's Book Fair, of which we are co-organisers, and at the same time to take our exhibitions or create new ones under our brand around the world. In the last three years our exhibitions' tours have visited over 30 countries, and we have also designed and organised the professional programme for the children's book area of the Moscow International Book Fair.

What's the best piece of book-related advice you've been given?
The best advice was to re-read the great works of literature I had read as a teenager or during my university years. This allowed me to rediscover, indeed to discover, wonders of literature and to understand them more deeply from the perspective of my own experiences and the sensitivity I have developed over the years.

What are the most interesting things you're seeing at the moment in the industry?
I find the diversification of the themes proposed by children's books today very interesting indeed. I like that they talk not only about fairy tales or adventures, but also about current themes, themes that until a few years ago were considered "difficult" for children, such as death, poverty, war, but also the environment, the role of women in society, politics. And I love very much the magnificent non-fiction that publishers all over the world are producing.

What do you think might be the next big thing?
I think that we will continue to see the absolute centrality of content and its ability to be successfully transferred from one medium to another. I think that, as is happening in general publishing, audiobooks will gain a very interesting market share in the children's book sector. And I would like to see us finally stop discussing the value of one medium or another, and think about the quality of the content and how it is made available to young readers.

How are you coping with working from home?
In some respects I don't mind, because it's easier to concentrate. At the same time, however, I really miss the daily contact with my team and colleagues in other areas, with whom, I must say, working is not only productive, it's also a lot of fun.

How do you think the industry will come out of the Covid-19 crisis?
The publishing industry will emerge strengthened and full of ideas and new projects. I think publishers have faced this difficult year not by bowing to circumstances but by accepting the challenge, rethinking their work and strategies. Talking to publishers over the last few months, I have felt a lot of concern, but also a lot of energy. Many of them may have postponed the release of some titles, but they have started new projects, new dialogues with readers.

What do you most like doing when you're not working?
I like running (it relaxes me), reading, visiting art exhibitions, going to the cinema, listening to music. And spending as much time as possible close to the sea.

What is the best book you've read in the last year?
Mmmm… that's not easy. Probably, it's Berta Isla by Javier Marìas. But I'd be sorry not to mention The Sense of an Ending by Julian Barnes and Life Plays with Me by David Grossman.

What are you reading now?
I'm reading Via Gemito by Domenico Starnone (who was supposed to be Elena Ferrante, while gossips says that Elena is his wife) because I am curious to explore the language and the style of writing to understand if it overlaps or not; in the meantime, I'm listening to the audiobook of Orlando by Virginia Wolf