The co-founder of whitefox contributes to our Q&A series 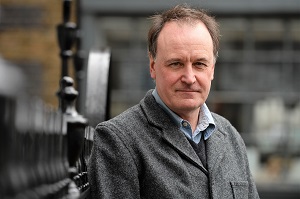 Describe your current job
I'm the CEO and co-founder of whitefox, a creative agency that helps writers, publishers and brands make books.

What was your first job in the book industry?
I was a bookseller at the High Hill bookshop in North London for a while, and then after that a marketing manager at Penguin. I went to an event recently where Tim Waterstone was talking about his memoir. He was discussing the battle in Hampstead between the long-established High Hill bookshop and the new Waterstones that opened up there at the end of the 80s. He told an anecdote about how the High Hill, at the end of its time of commercial viability, was so terrible and saving electricity by turning off the lights in different shop units during the day. Which, given I was there, was palpably untrue and so made me think, if he's making up that stuff, I can only wonder about the verisimilitude of the rest of the book. If working in publishing has taught me one thing, it is that everyone has their own version of reality.

Who has been the most influential person in your career?
I've thought a lot about this question, maybe properly for the first time. I've been inspired by brilliant people managers like Helen Fraser and Andrew Welham, as well as many incredible creative publishers. And my wife is the best sounding board for career advice that I know. But the truth is Victoria Barnsley has been the most influential. If I hadn't been one of those people shoved down the laundry chute of unwanted executives at Harper Collins eight years ago, I'd never have had the genuinely entrepreneurial experience of setting up whitefox.

How has the industry changed since your first job?
In my interview for my first job in publishing, as marketing manager at Penguin, I was asked if I played golf. So I sincerely hope it has changed massively since those days. Back in the early 90s, someone in sales and marketing had a full-time job organising two week-long sales conferences every year. Crazy. I was basically doing lots of copywriting in a world of blads and dumpbins and counter-packs (welcome to the wonderful world of cardboard engineering). I know I once wrote copy for a Martin Amis paperback which he told his editor he thought was "armpit-torchingly bad". You tend not to forget these things.

In those days, marketing was the bridge between editorial and sales that used multiple retail chains as a way of segmenting the UK market. Now I guess it is more important than ever because every release is fighting for consumer discoverability. But it is still ultimately about the books, isn't it.? You have to nurture the pickers. You've got to have the books that people want to buy, whether you've come across them via trend analysis and YouTube stats or via serendipity or just by having great radar and taste.

What's the biggest challenge in your job?
Striking the balance between scaling without compromising quality. We know we can grow, but we also know growth can be painful. So mitigating against that with planning. And thinking about recruitment all the time. I count myself lucky to have supportive shareholders and forensic non-execs who see it as their job to keep me on track and not tell me things I might want to hear.

What's the best piece of book-related advice you've ever been given?
That if you build it, they will come is just whimsical nonsense. Creating awareness and selling and marketing is a constant. And that complacency is always the enemy (that'd be Helen Fraser). Sound advice in life as in books.

What are the most interesting things you're seeing at the moment in the industry?
What interests me most is that I think the different eco-systems within publishing are settling down somewhat. So traditional legacy publishers seem less concerned about disintermediation from writers and agents. And indie writers and brands who want creative and scheduling control are happy and confident to go DIY and take their own content to market. And these things can co-exist quite happily without anyone thinking either side is eating their lunch.

What do you think might be the next big thing?
You are lovely asking me this. As if I would know! I've attended conferences over the last 10 years and seen lots of the things lauded as the next big thing - subscription, AI, countless apps - and I've seen lots of areas explode - like audio. Most disruptive elements are over-estimated in the short term and under-estimated in the long term, to paraphrase Bill Gates. I do think the next area ripe for revolution in self-publishing is rights. I'm sure the Alliance of Independent Authors and Orna Ross will be working on resolving that for indie writers soon.

What do you most like doing when you're not working?
Well, I work a lot. But it's not work really is it, if you just love what you do? Faintly nauseating but true. I've just stopped playing five-a-side football, which I miss. But I got fed up with 25-year-olds who'd had heavy nights out still being able to cruise past me effortlessly on the astroturf.

What is the best book you've read in the last year?
Stefan Zweig's Beware of Pity. Nicola Barker recommended it in an article I read about her recently. I thought it was astonishing and utterly heartbreaking. And I loved David Nicholls' Sweet Sorrow. I honestly can't work out for the life of me why it hasn't sold five times as many copies. He's one of those writers who makes it seem beguilingly easy to do something that is actually incredibly difficult - write genuinely funny, believable characters in what feel like universally recognisable situations.

What are you reading now?
James Hawes's The Shortest History of Germany. My wife took me away for my birthday to Berlin a few weeks ago and we bought it at the airport. I'd never been and had always wanted to go. And now we're both reading and listening and watching anything which tells us more about this extraordinary country.