As Carcanet prepares to celebrate its 50th with a party at Tate Modern, founder and md Michael Schmidt contributes to our Q&A series 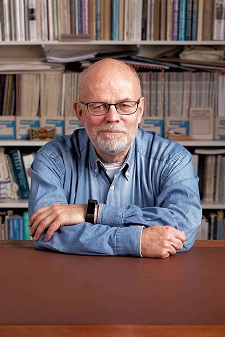 Describe your current job
I choose the books we publish and have a finger in every pie: admin, sales and marketing, finance, cleaning and catering... none of our tiny departments is safe from me.

What was your first job in the book industry?
My first job was in fact the job I still have. I set the press up 50 years ago and have done more or less the same duties ever since. Though the publishing world has changed a bit in that time, the operation has grown, and the work is never done.

Who has been the most influential person in your career?
Robert Gavron, who bought Carcanet from me in 1983 and taught me a lot about organisation, and about how it was possible to publish books for readers rather than just for a market. He worked on a very large scale but he understood that some cultural activities exist at a pre-statistical - even an anti-statistical - level, in a world characterised by dialogue and enthusiasm. A cultural world. We have always been in the happy position of knowing many of our readers personally. I am especially grateful to Bob Gavron for appointing Kate Gavron, with her long experience in literary publishing, as the chair of Carcanet, where she still presides.

How has the industry changed since your first job?
The floor and ceiling of publishing have moved apart. In ancient times the little publisher could talk to the big bookseller, and I felt I had a friend in Basil Blackwell and Tim Waterstone. (I still have a friend in Robert Topping.) The scale has changed. We are close to independent shops and some of the smaller chains and the independent publishers. Also the print and broadcast media review attention to poetry has diminished: it's generally feature coverage or nothing.

What's the biggest challenge in your job?
Lack of time. With a small team of colleagues (seven), producing 40-odd titles a year and a magazine that comes out six times a year (PN Review, soon to publish its 250th issue) is considerable labour. And I make my main living as a writer and university teacher, since poetry is not a paying game.

What's the best piece of book-related advice you've ever been given?
Advice I've never been able to take: publish fewer books.

What are the most interesting things you're seeing at the moment in the industry?
The growing insistence on diversity has been fascinating to watch. As a teacher, one of my best ever pupils was Jennifer Makumbe, whose novel Kintu has at last had the success it and she deserved. I could never understand why it wasn't published sooner, and in the UK; there is so much wonderful work coming from other parts of the Anglophone and new-Anglophone world. It sounds different, it has different subject matter, but it stretches language in positive ways, enriching rather than diluting it.

What do you think might be the next big thing?
I hope it will be a rebellion against cultural populism, which is impoverishing readers, and a resistance to the ideological imperatives which are shutting up some of the most wonderful and instructive writers of the past.

What do you most like doing when you're not working?
Walking (canals or hills) and reading.

What is the best book you've read in the last year?
The Pillow Book of Sei Shonagon - not very modern, I appreciate.

What are you reading now?
I tend to re-read a lot, and I am currently re-reading the poems of Borges and of Wallace Stevens, both of which travel in my backpack.

How do you like to read: on screen, on paper, or do you listen to audio books?
I love audiobooks, but my primary pleasure as a reader derives from physical books. Ebooks are useful when you're writing and teaching because you can search them, but nothing really beats a comfortable chair, a notepad, and a book.