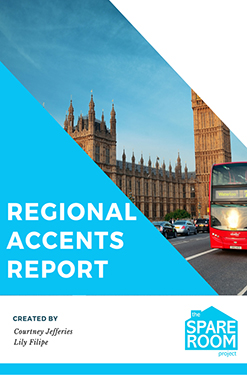 A study by Bath Spa University publishing graduating students has revealed that 67.2% of participants who work in the book industry feel that their accents have made others act differently towards them.

Lily Filipe and Courtney Jefferies created the Regional Accents Report in association with James Spackman of the Spare Room Project and The bks Agency, examining the way that regional UK and international accents affect careers in the publishing industry. 57.9% of respondents identified themselves as having regional UK accents, and 23.2% identified themselves as having international accents. There were 353 respondents in total.

37% of respondents who had accents felt that the accents had impeded them in their careers, and 56.8% had thought they should change their accents to fit in/appear more employable. 36.4% said they felt an accent defines an individual's class. 88.1% of respondents said there should be better representation of different backgrounds and more open attitudes to accents in the workplace.

One person said they had been perceived not to be well-read, while others felt they were stereotyped as 'thick', 'aggressive', 'unrefined' and 'miserable'. One respondent said that they had been the 'only person who sounds international (i.e. non-British)' in all their publishing jobs, and as a result colleagues presumed they didn't know how to spell or that they needed to be taught English. Some Northern respondents felt that many people presumed those in the North to be working class, with one saying there was 'a misconception that "the north" is poor and unsophisticated'.

Some survey respondents recalled instances of teasing from colleagues who may not have realised it was 'accentism'. Respondents felt that the publishing industry was too 'London-centric', meaning that the rest of the UK wasn't represented, and that regional and indie publishers had more diverse workforces. A few respondents said that they were leaving the industry as a result of feeling isolated.

Spackman said: "We're all prey to unconscious bias, so it’s incredibly important that we chase down every factor that could be holding the industry back by limiting - even subtly - talented people’s progression."

Jefferies said: "We hope that this report will spur others on to further investigate accentism in the publishing industry. After undertaking this project, my understanding is that there are many intricacies within accentism that need to be investigated. I believe there is accentism in the industry, and so we must dive deeper to develop tactics to ensure that those with accents - especially those already underrepresented - are not disadvantaged."

Filipe said: "Our aim for this report is to shed light on the issue of accentism not only within the publishing industry, but in the UK creative industries more broadly. Given the magnitude of this issue, this project has been an eye-opening experience, as we were given the opportunity to discuss an issue which has affected so many individuals."