Prize celebrates 'outstanding crime and thriller storytelling of those who are from, or whose work celebrates, the North East' 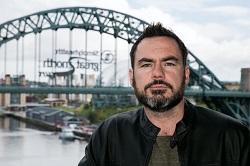 The judges felt Helix: "had everything an action adventure should have - a conspiracy that is high concept, quick-paced writing, and convincing action."

Scragg (pictured) became a crime writer having previously worked as a bookseller, pizza deliverer, karate instructor and football coach, and is a founding member of the Northern Crime Syndicate Crime Writers Group.

He said: "When I saw I’d won, I was literally speechless, and may have done a little dance in the kitchen, that I’ll spare the world a repeat of. Looking forward now to polishing up my story and getting it out there for readers to see." He receives a £2,500 cash prize to support the completion of his work, alongside funding for membership of the Society of Authors and the Alliance of Independent Authors.

Now in its third year, the Lindisfarne Prize for Crime Fiction was founded by Ross and is sponsored by her publishing imprint Dark Skies Publishing, in association with the Newcastle Noir Crime Writing Festival and Newcastle Libraries.

According to organisers: 'The aim of the prize is not only to provide financial support, but to help build and maintain creative confidence for new, emerging and established writers in the crime and thriller genre.'

Ross said: "Since its inception three years ago, the Lindisfarne Prize for Crime Fiction has gone from strength to strength, which is reflected not only in the growing number of submissions from extremely gifted writers but also in the quality of the writing. This year’s crop of talent, in particular, really gave the judging panel plenty to think about, but I’d like to congratulate Robert for winning the prize with his highly compelling submission. I am really looking forward to reading more of his work and following his promising writing career in the future."

The judges took the unprecedented decision to also formally award Newcastle author Barbara Scott Emmett with the award's first ever runners-up prize, for her submission Dog Leap Stairs. She receives a £500 prize.