Roddy Doyle was Author of the Day on Tuesday of the London Book Fair. Nicholas Clee asked him some questions in advance 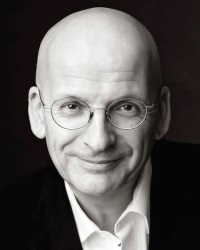 NC: Have you visited the London Book Fair before? Any book fairs?
RD: I haven't been to the London Book Fair before. I was at the Frankfurt Fair once, years ago, soon after I won the Booker Prize. But I stayed away from the pavilions. So, strictly speaking, it would be more accurate to say that I was in Frankfurt while the fair was on. I was at the book fair in Vilnius about 10 years ago and I really enjoyed that one, even though it was mid-winter in Lithuania and I quickly understood that the term "bone cold" has real meaning.

NC: You don't stay still: you write adult books, children's books, dialogue-driven books (Two Pints), even a footballer's book. Do you enjoy stretching different creative muscles?
RD: I haven't stretched a creative muscle in years. I used to worry that I'd run out of ideas. But as I get older I know it's not ideas; it's energy. As long as the job involves words and story - and it's what I really want to do - I'll give it a go. I enjoy the contrasts between the different forms. Writing a film script is so different to writing a novel, I find it quite easy to give proper attention to both in the same working day.

NC: You've also revisited characters: Jimmy Rabbitte, Paula Spencer. Have these books been long planned, or spontaneously embarked upon as the characters fire your imagination again?
RD: As of September 2017, I'll have had 11 novels published and only two of them stand alone. I've always stayed curious about Paula Spencer, for example; I often wonder how she's getting on - if there's another book there. Others, like Jimmy Rabbitte, stroll up after years of hiding in some chamber at the very back of my head. When I started work on the script for the musical of The Commitments about seven years ago, I was pleased that, years after I'd given Jimmy his name, I could still imagine him. And I began to wonder what the years had done to him - again, how he was getting on. So I wrote The Guts. It seems to make creative, and human, sense to return to characters.

NC: Literary prizes may be even more significant now than they were in 1993. What effect did winning the Booker have on your career?
RD: My work was already well known in Ireland, where I live. The Commitments had become the most commercially successful film ever released in Ireland at that time. My novels The Snapper and The Van had been very popular. So, after about a month of turning down interview requests and invitations to open supermarkets or to have lunch in aid of the destitute - keeping myself to myself - life reverted to normal. But I was suddenly an established writer, as opposed to a bit of a maverick. I had to keep my eyes on the page, to make sure I continued to write exactly what I wanted to write, not what might be expected of me. Winning the Prize had a huge impact on sales. I was a wealthy man for a while - just months after I'd given up my job as a teacher. The timing was, for once, perfect.

NC: You set up Fighting Words. Why did you do it, and what has it achieved?
RD: I was an English teacher for 14 years, between 1979 and 1993. In that time I wrote my first four novels - but I couldn't really teach creative writing because it wasn't on the curriculum. The thinking was, and perhaps still is: if it can't be graded, it has little value. So, I co-founded Fighting Words in 2009, to combat that stupidity - to make creative writing as inviting as possible for children and teenagers, and to let their teachers witness the impact it has on their students. And it seems to be working; we now have six centres in Ireland and have worked with 80,000 children and young people. We now have training courses for teachers - they seem to love it. I recently watched a class of 10-year-old boys writing a story together, in the new Fighting Words centre in Cork. The boys wrote the best sentence I've read in years: "God ran away."