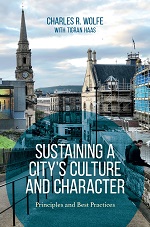 We invariably are products of our upbringings, which in my case has led me to write a third, well-illustrated book on understanding city life and form. The focus on sustaining culture and character has become even more relevant to me after moving abroad and watching how quickly central issues of urbanism have evolved over the past 10 years and how they manifest in different cities, especially in pandemic times.

Ten years ago, as an attorney in Seattle, it was not clear to me that unprecedented change was afoot; that redevelopment and an ongoing shift to a more technocentric city would alter demographics and the city's look and feel. At that time, urbanism, especially to a newly elected progressive mayor, meant alternative forms of transportation and giving voice to previously marginalised populations. We had no expectation that homelessness, "boxy"and identi-kit apartment development, and nostalgia over a lost past would dominate the rhetorical and visual landscapes.

Nor could I have predicted that in London and Newbury, I would become so interested in comparisons between places and their similarities or differences. As I type on a UK keyboard, spellcheck is accusing me of spelling errors that are not errors to me. I should be honoured by the publication of a new book, not honored. I should be writing about neighbourhoods. We don't yet have a universal language.

Although some aspects of urban living may seem more and more homogeneous, I have seen the difference between cities with pre- and post-automobile urban forms, diverse populations that merge, and different takes on how to resolve common dilemmas.

Evocative names
When I was very young and just beginning to learn about the built environment from my father, an urban-planning professor, I was fascinated by sewer grates, castles and ruins, and walls of cities that showed all of the eras of their existence. I loved hill towns and the crooked narrow streets that boasted names that reflected their history. From a name such as Church Street, I knew what once had been there, and Old Street meant just that. These are things that still engage me, and that I photograph today.

Before 2017, when I would return home after travelling, little in Seattle was similar to what I saw in Europe. On the other hand, mountains and bodies of water and companies there were changing the world.

In 1965, when I was nine, I stopped over in London with my parents on the way to Italy, where we were moving. They took me to see the changing of the guard at Buckingham Palace, and I remember a particular sombre-faced soldier who looked at us and could not conceal a smile. My mother explained why: he had red hair, like me. A shared identity led to an emotional sign of recognition, no matter the nationality of each citizen.

Soon after, my father took me to see the Rosetta Stone in the British Museum. He explained that this was the key to translating ancient Egyptian to ancient Greek. To some degree, Sustaining a City's Culture and Character is an attempt at Rosetta Stone urbanism, with a translation tool designed to facilitate today's dialogues on density, beauty, affordability, climate change, and the critical issues of the day.

When I was first in Israel at age 19 (and then again at 54) and beheld places of legend - the Jordan River, the Valley of Death), Hezekiah's Water Tunnel, and locations of political conflict that go on and on - I saw something very relevant to how we anticipate the appearance of iconic places. Though revered, these places were undeniably small, human scale, or ordinary, however large they loomed in the mind. Because they had been memorialised, idolised, these sites spurred anticipation that was offset by a realisation that places often are, at first, only what we think they will be.

Ten years ago, I began to drift from advocating clients' visions of urban development to something more rooted in my own experience. Marooned on an island between right and left brain, I started earnestly thinking about how to make it easier for succeeding generations to perpetuate urban distinctiveness. I'm impressed by those who understand how to bring together seemingly divergent personalities to create a bigger whole; who can mine culture and character from experimentation; who can determine what works given a particular population and places in transition.

Holistic approach
Personal perceptions such as my own, social media (especially Twitter) declarations, and the hypotheses of academics and professionals do not separately preordain results; instead, they together define the culture and character of a city. This holistic approach is not only warranted, but it adds clarity to the urbanism dialogue today.

At what point does change to a human settlement become nostalgia-oriented and something to oppose, sustain, or support? I believe that books such as this one cannot be solely objective but must also present a mixture of fact and conjecture, the notion of many that opinion plays as much of a role as architecture and economy. Objectivity and perception of exteriors must allow for beautiful interiors that may stand behind graffiti-laden, ho-hum, or standardised walls.

Sustaining a City's Culture and Character by Charles Wolfe with Tigran Haas is out in hardback Rowman & Littlefield today (24 June). It is the final book in a trilogy designed to raise awareness of the intrinsic identity of urban places and the importance of avoiding urban renewal that is out-of-scale, context, or character.