Sir Ian Blatchford, chief executive of the Science Museum, joins organisation which has been providing assistance for hard-pressed authors since 1790 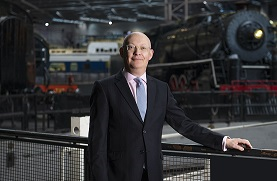 Blatchford has overseen the transformation of the Science Museum - which this year received the accolade of Art Fund Museum of the Year - during a decade as chief executive and director of the Science Museum Group, which comprises five museums throughout England and is the largest group of science museums in the world. He is also the current chair of the National Museum Directors’ Council.

Blatchford (pictured) said: "I am a true believer in the power of great writing, so I am honoured to be able to play a part in the life of this extraordinary benevolent fund, created more than two centuries ago by writers, for writers. Never has the work of the RLF felt more important as the publishing industry continues to grapple with the ongoing market changes. The unique and diverse voices of British novelists, biographers, playwrights and poets is needed more than ever in these uncertain political and economic times."

RLF chief executive Eileen Gunn said: "We’re delighted that Sir Ian has agreed to take up this role. There’s no doubt his great energy and broad knowledge and involvement in the cultural world will further our mission to serve all writers in need."

The RLF is governed by a board of trustees, including Joanna Trollope and Mark Le Fanu. Applications to the Fund for grants have risen sharply in recent years and the Fund supports around 200 writers a year.

The RLF also runs a Fellowship Scheme that places writers on university campuses and other institutions nationwide to provide writing support to students. This year 113 Fellows are working in 86 universities across the UK.

Blatchford is 'no stranger to publishing, having written for academic journals and last year he co-authored with Dr Tilly Blyth The Art of Innovation: from Enlightenment to Dark Matter, a take on how interactions between science and art have shaped the world around us as part of a landmark BBC Radio 4 series,' according to the RLF.